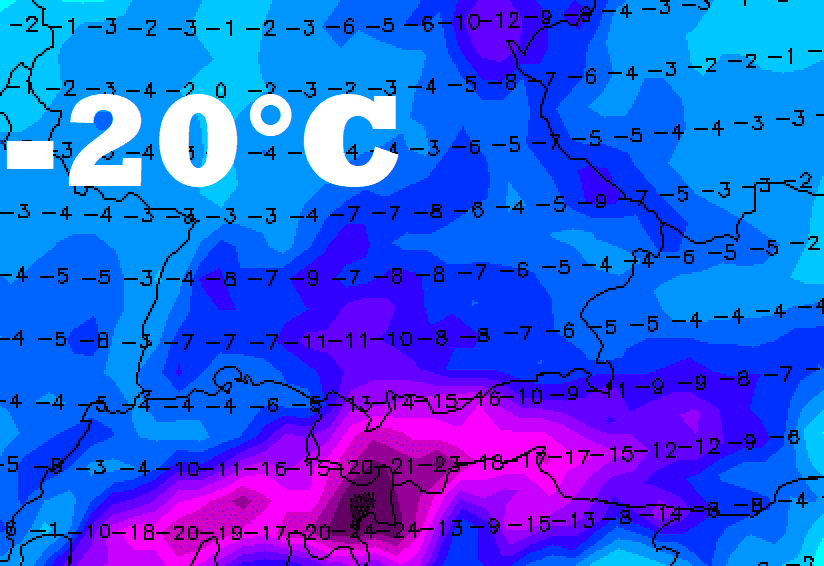 Extreme winter conditions already in the half of November 2021 are confirming and fresh outputs of GFS see a potential for extreme -20°C in Central Europe – mainly in Alps, Germany, or Czechia, while other parts of continental Europe should see -10/-15°C in the coldest valleys.

In Scandinavia should be even colder, between -25/-30°C according to Mkweather estimates.

Severe frosts around -15°C in frost valleys are predicted for Balkan, too and frosts hit parts of Spain, Portugal, Italy, or Greece, later (the model doesn’t see, yet) in Turkey and Eastern Europe.

Severe frosts or the first snow should report gradually mountainous parts of North Africa or the Middle East and cooldown later will shift above Central Asia and Western Siberia.

The period is around 20. November should be a little warmer, but at the end of the month should arrive even colder, extremely cold weather, and sometimes around 25. November – 10. December, the long cold period should be peaking.

Severe frosts should be associated with snowing and problems on roads and highways, such as increased incidence of many diseases such are heart attack, viruses diseases, or some types of cancer, such as rare hypothermia and worse potential for outdoor activities, mainly for meteosensitive people. The gas crisis in some countries is possible, too, in the next weeks.

Mkweather will furthermore watch a forecasted situation and in the case of new extreme outputs of GFS, we will inform you soon on our homepage.

(Visited 833 times, 1 visits today)
Liked it? Take a second to support on Patreon!