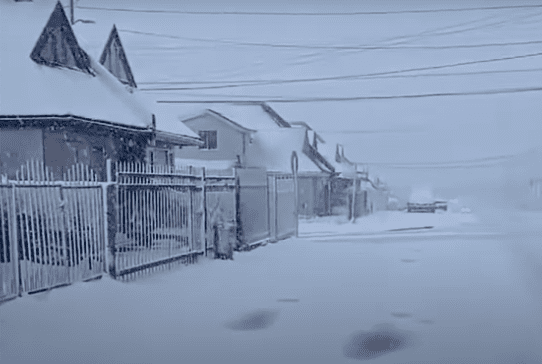 Punta Arenas, a city in the southernmost parts of Chile with a relatively moderate climate, where temperatures during summer don´t reach more than +27,0°C and Arctic blasts in winter should produce frosts only up to -14,2°C hit at the weekend untraditionally powerful snowstorm.

Temperatures on Saturday were moving near heavy snowing between -0,7°C and +3,0°C, which are ideal conditions for heavy and big snowflakes.

The city with a population of around 127 000 has experienced winter shock in the last hours, but it has warmed up again, already and snow is quickly melting.

From the event, however, stayed many video materials and excited people in the region who weren´t worried about the situation on roads and capture one of the main snow events of the year 2021 on their phones.

After unusual winter blasts are other parts of South America, too, but severe frosts were replaced by heatwave /https://mkweather.com/bolivia-and-peru-under-the-snow-snowing-appeared-in-metropolitan-areas-too/; https://mkweather.com/snow-in-brazil-hit-larger-areas-than-usual-sao-paulo-the-2nd-coldest-temperature-in-20-years-43c//.

Meanwhile, in northern parts of Argentina, an extreme heatwave is peaking at the weekend, with really anomalous temperatures.