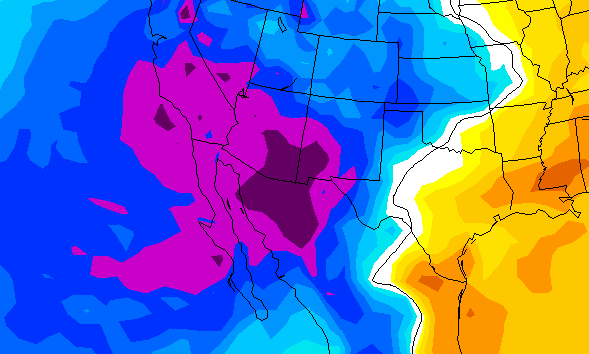 While Europe was during last week sink into Siberian winter, California, Arozina or Nevada in the USA have enjoyed tropical, summer-like weather. Situation however, in some parts of California has been critical thanks to extreme Santa Ana winds and unseasonably windfires. After extreme tropical outbreak, a powerful winter coldwave in region already early next week is expected.

The hottest was during last period in Camarillo, California, where meteorologists measured almost supertropical +35°C (94°F = +34,4°C). Temperature records were reported not only from California, but too from Arizona or Nevada.

Santa Ana winds were the strongest in Ward Mountain, with wind gusts up to 220 km/h / 137 mph.

Immediately after peak of summer weather in the middle of the winter, next round of wildfires has been reported. Some fires reached populated areas.

During next days, wildfire conditions will be weakening and early next week, extremely codl air, with anomalies below -12°C in 850 hPa will shift over California, Arizona, New Mexico, southern Nevada and parts of Mexico.

Southwestern USA and Mexico therefore are waiting temperature shock, with possible cold mornings, what should make worse respiratory diseases (influenza, covid), but too e.g. a heart attack rate /https://mkweather.com/2021/01/16/heart-attack-influenza-cancer-frostbites-hypothermia-covid-what-you-should-to-know-about-arctic-and-siberian-coldwaves// in the region.

In contrary, in northwestern USA during last weeks, have operated “an Atmospheric river Category 5” with winds of “Category 3 hurricane”, with regional floods, in higher elevates regions blizzard conditions.

Midwest and Northern Plains have reported relative powerful a blizzard during last period.

T850 hPa anomaly over the region around Tuesday, 26. January 2021 /wetterzentrale.de

(Visited 25 times, 1 visits today)
Liked it? Take a second to support on Patreon!