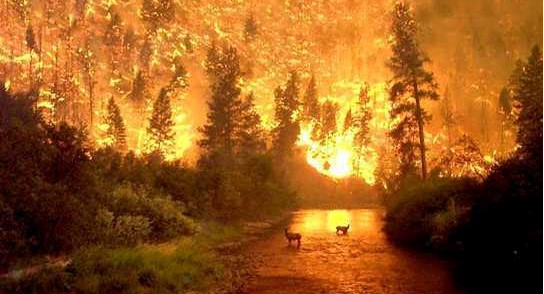 While Europe experiences regionally with the coldest April in all-time history and the USA and Canada after April coldwaves are preparing to May late frosts, situation in parts of Asia is diametrically different.

Heatwave in the region is persisting since 20. April 2021 and long-term heatwave started to behave very aggressive in last days, such as in summer months.

Long-term cyclonic weather in central parts of Europe and later Balkan and Eastern Europe too contributed to hot air advection to Russia, including Siberian parts.

Many parts of Russia in April 2021 reported summer days above +25°C, including northern latitudes. In Caucasian region, the first +30°C was overcame.

Region of Omsk according to the newest information hit extreme wildfires, while Novosibirsk is bothered by smoke from them.

According to several watchers, wildfires are at the end of April 2021 already 10-times more extended, such as during usual late April season.

On 26. April 2021 the total area of land burned by wildfires reached 170,000 hectares. Wildfire infernos in Western Siberia is driver for zero visibility in Novosibirsk region.

The next watchers notices anomalously high temperatures above Russian Arctic these days, mainly around wide region of Chukchi Sea.

According to Forests News, wildfires in Siberia are predictable through wind speed trends, analysis shows /https://forestsnews.cifor.org/72264/wildfires-in-siberia-are-predictable-through-wind-speed-trends-analysis-shows?fnl=en/.