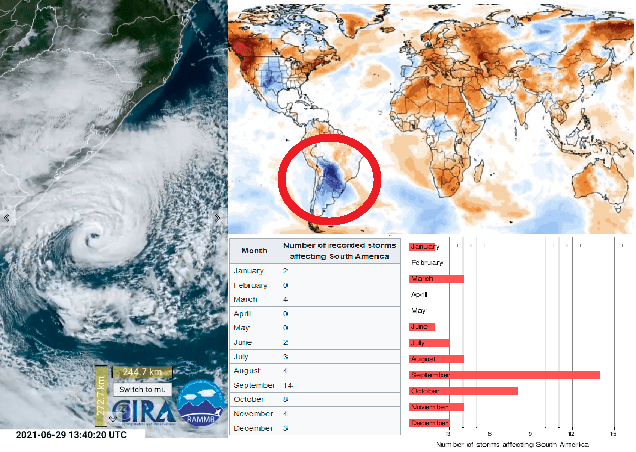 Tropical storm near Brazilian and Argentinian coast in the winter!

Raoni, a very rare tropical system has developed neat South American coast almost in the middle of winter, while the frontal boundary, associated with the system is bringing rainfall and snowing across South American states.

From Buenos Aires province, even snowfall was in last days reported.

In the month of June in the past, only 2 tropical systems, which affected the land, have developed near South America (South Atlantic coast), while in May, a tropical storm in the region, which hit land, has never been observed.

Maximum of activity of these, strange and very rare tropical systems, was observed in September, when 14 storms, which affected the continent of South America, so far.

Only one South-American hurricane appeared in March 2004 – Catrina reached an intensity of Category 2 hurricane, killed up to 10 people, and caused millions of dollars damage in Brazil.

Since 1950, from 7 to 19 tropical storms per decade appeared near South America, but in 2020 and 2021 it is together already 7 storms and it is expected, that until the end of the decade, a record number of tropical storms will be observed.