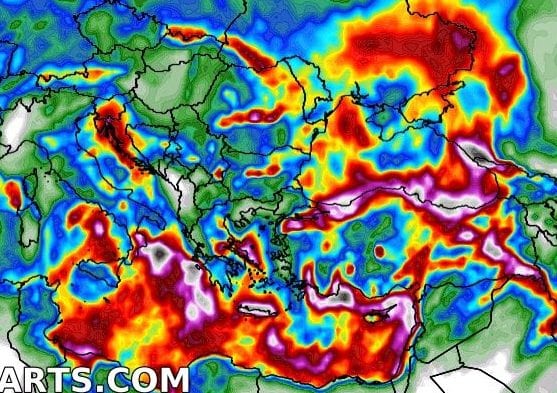 Besides possible heavy rains and winds in northwester sector of Europe and expected storms from remnants of a tropical storm Theta in Portugal, Spain and the UK, hard times are prepared for parts of Central and Eastern Mediterranean, too.

During incoming week hit Italy, Slovenia, Croatia, Bosnia and Herzegovina, Greece, Turkey, Cyprus, Tunisia, Libya, Egypt, Israel, Lebanon and Syria 2 Mediterranean storm systems and impact of the second one will be continue after Sunday, 22. November, too.

The first from systems will divide from powerful cold front south of the Alps and brings heavy rainfall to Italy, Slovenia, Croatia and parts of Bosnia already on Monday and Tuesday, 16.-17. November 2020.

System will shift above Greece on Wednesday and Thursday, 18.-19. November and then above eastern Turkey, Israel, Lebanon and Syria until the end of week.

The second system, linked with remnants Theta, too, will arise above Italy and will continue above Tunisia and Libya until the end of the week, with next, but little weaker activity after 22. November in Eastern Mediterranean (Egypt, Israel, Lebanon, Syria, Turkey, Cyprus).

Both systems will be linked with incoming cold period to Europe in the second half of November 2020 /https://mkweather.com/2020/11/13/europe-under-the-snow-with-20c-frosts-it-starts-already-next-week//.

In some regions, such as eastern Italy, Slovenia, Croatia, western Bosnia and Herzegovina, Greece, southern Turkey and coasts of Tunisia, Libya, Egypt, Israel, Lebanon and Syria, flash floods will be possible and in some regions, stronger winds should appear already in next 7 days.

Therefore will be careful and watch current warnings and forecasts.