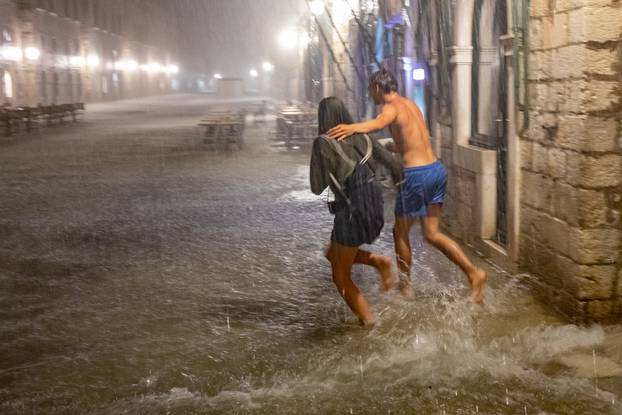 Day 4 of several storm round in Europe, is late evening and we can summarize known and new weather extremes across western Balkan and neighboring regions.

During last days heavy storms, rain and floods occurred from Germany to Greece.

On Sunday, storms caused big problems in Germany, Switzerland , Austria and Italy, with 3. level of warnings, in Germany mainly floods, in Italy gusty storms, hailstorms and floods and in Austria and Switzerland severe storms with heavy rainfall. Wind gusts near storms reached 106 km/h, precipitation amounts up to 129 mm.

On Monday and Tuesday, storm line shifted above NW Balkan, with surprising gusty storms in Croatia with wind gust up to 140 – 150 km/h and large hails in Italy and Croatia up to 8 cm. During 48 hours dropped in Salzburg, Austria, 223,4 mm (almost 9 inches) of rain and people in Alpine region and Dalmatia had ruined vacations.

Cold air after cold front arrived over southern Italy and many tornadoes were reported on ESWD. On one shot, 4 tornadoes are visible!

During Thursday and Friday, severe storms will persist over Balkan and Greece. The most severe thunderstorms are expected over Montenegro, Kosovo, Albania and North Macedonia on Thursday and Serbia, Bulgaria, Kosovo, North Macedonia and Greece on riday. At the weekend this storm round will weakening and above Europe will start next long-term heatwave. /https://mkweather.com/2020/08/05/london-with-7-day-heatwave-6-12-august-on-friday-35c-95f-possible//

(Visited 89 times, 1 visits today)
Liked it? Take a second to support on Patreon!