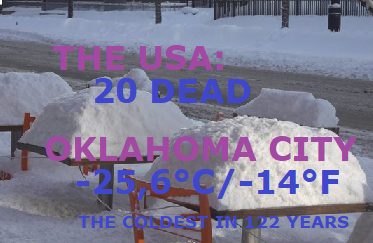 Wave of extremely cold weather in the USA continues and country reports minimally 20 dead, 73% of the territory under the snow /a topic of the next article/ and many broken all-time or very old temperature records.

Extremely cold wasn´t only in Texas, but in the large region between Canada and Mexico (from Minnesota to Texas), including Oklahoma. In Oklahoma City was on Tuesday, 16. February measured the coldest temperature in 122 years, since the end of 19. century, only -25,6°C / -14°F.

Meantime, area within a territory of the USA under the snow reached 73%, what is the lowest value since the beginning of records in 2001. Southeastward from extreme blizzard, freezing rain has occurred in Southeast.

Extreme winter is still forecasted until Friday, in east until Sunday and during the next weeks, extreme winter should return mainly into parts of Canada and Great Lakes region.