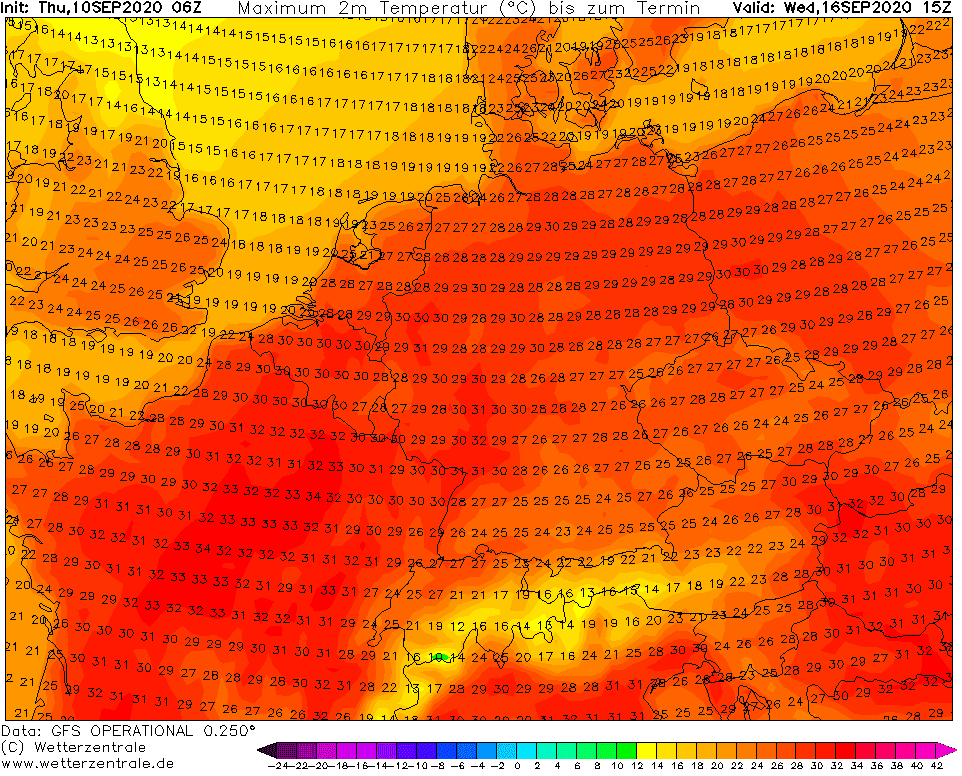 Whereas ex-hurricanes / ex-tropical storms over Atlantic will have longer and more westward shifted parabolic stormtrack during next week, it will be linked with chance of longer heatwave above continental Europe, than was before few days expected.

In southeastern Central Europe, heatwave with temperatures over +30°C in lowlands could take from Sunday to Friday 13.-18. September – a long 6 days!

High temperatures will start on Sunday in France and already Monday will be the hottest day in country, with maximum temperatures in the south of up to +37°C (99°F). In Paris region, +35/+36°C (95-97°F) is possible on Monday and on Tuesday.

Benelux expects anomalous temperatures of up to +33/+34°C in the middle of September – on Tuesday, 15.9.2020. Similar temperatures are possible in Germany, on the borders with France.

Hungary and Slovakia will report extreme high temperatures all period, from Sunday to Thursday, with possible CountryMAX of up to +33/+34°C around Wednesday, 16. September.

Other countries in region – Austria, Switzerland, Czechia, Poland and too UK expects overcoming of threeshold +30°C during the period – in London around Tuesday, 15. September, in Switzerland during first half of period and in Austria during second half of period 13.-18. September. In Poland and Czechia, the hottest day will be probably Wednesday.

Thanks to more slowly circulation than was expected, next coldwave could arrive little later, but still with possible strong manifestations such as first frosts, ground frosts and rarely first snowing across southern latitudes. News about expected coldwave after 18. September we will bring soon.