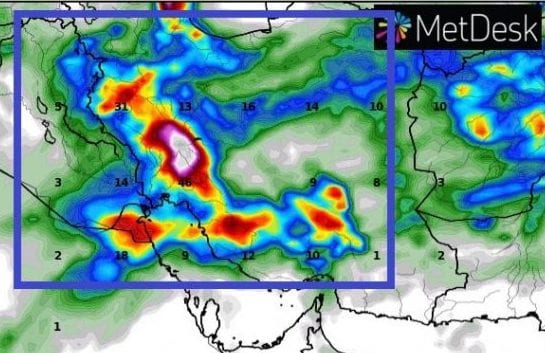 During NAO- phase, Mediterranean lows are continuing in their ways eastward, directly above this region, with winter – rainy and cold conditions mainly in northern parts of Middle East.

Between 5.-15. December, a big coldwave is in the region expected, with possible first ground frosts or frosts in lower situated regions, not only in Iran or Iraq, but too in northern Saudi Arabia.

Mediterranean coast of Middle East will be bothered by severe storm with next floods.

In Iran, colder December, warm and dry January and probably warm February is expected according to seasonal forecasts.

16-day precipitation forecast for Middle East – the most heavy rains in Iran is expected /wxcharts.com:

(Visited 51 times, 1 visits today)
Liked it? Take a second to support on Patreon!