Severe T-storms are around 15:00 Central-European /10:00 New York time reported from area southerly from Great lakes, the strongest from Illinois. During the next 48 hours, cold front according to Accuweather and Wunderground hit the whole area of Northeast and East coast, during Sunday and Sunday-Monday night up to Pittsburgh and Montreal, until Monday evening all Northeast and East coast with strongest winds in New York area.

Temperatures before arrival of cold front will be anomalously high, the most in area of Philadelphia and Kansas City with excessive heat warmings. In Baltimore 100°F, in Boston 96°F, is expected, in New York and Hartford 97°F and in Philadelphia 98°F is expected.

Warnings: storms will return to Midwest, heatwaves to West, Alaska and NW Canada rain and coldwave are expecting

During Monday, we are expecting the strongest storms in Midwest and Quebec and peak of heatwaves in Eastern/Northeastern coast. In Tuesday will be finally little colder, but storms will stay in area of Midwest and near the northern borders of US.

Heatwaves in Tuesday will return to the West and Seattle and Vancouver can report stronger winds during next days. Alaska is waiting rain and NW territory of Canada a coldwave during next days.

Heatwaves in th US in Monday 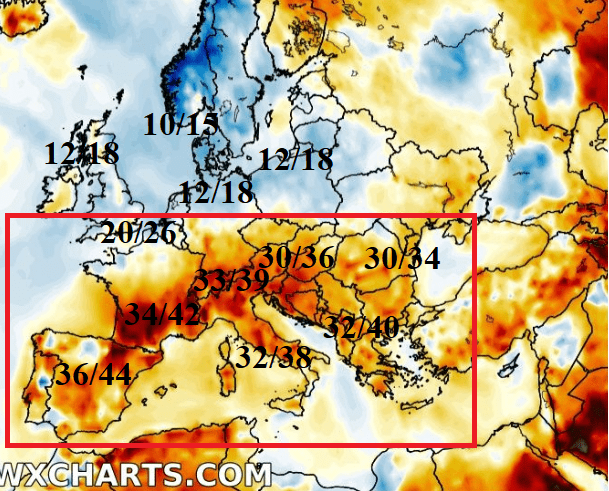 Heatwaves in Europe will have peak in ...