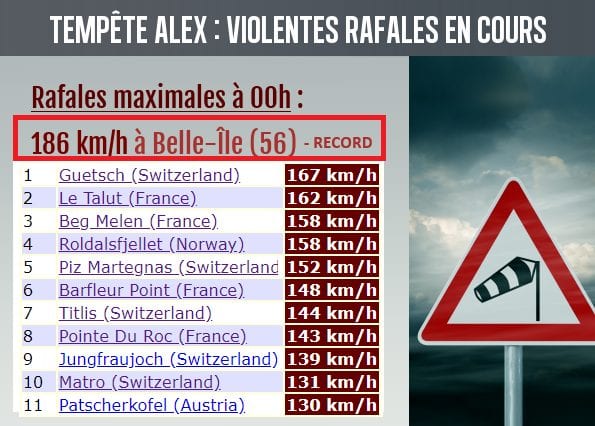 Windstorm Alex is bringing recorded wind gusts in northwestern France and bothers many other European countires. On early Friday, 2. October 2020, in Belle-Ile was measured wind gusts up to 186 km/h and in series next cities in densely populated area has flown wind with speed 100 – 160 km/h.

During the weekend, the strong winds expand in Europe and they occur not only in the UK, Ireland, Spain and France, but too in Italy, West Balkan, Austria, Czechia or southern Scandinavia.

System is bringing heavy rains to France, Spain and Switzerland on Friday, but at the weekend, downpours will shift over British Isles, southern Scandinavia, Corsica, Sardegna, Italy, Austria, Slovenia, Croatia, Bosnia and Herzegovina and Montenegro, with 40 – 120 mm of rain across large parts of the UK and Ireland (with severe flood risk!) and possible severe storms in southern East-Central Europe and Adriatic.

Before an arrival of severe storms to Central Europe and Balkan, we expect extreme high temperatures from Italy to Poland – in southern Italy of up to +36°C, over Balkan up to +32°C (Serbia, Croatia, Bosnia, Albania, but tropical +30°C in Romania, Bulgaria, Greece, too) and up to +28°C in Slovakia, +27°C in Austria, +26°C in Poland and Czechia and +24/+25°C in eastern Germany.

We will furthermore monitor the situation and will bring the fresh news during the weekend.