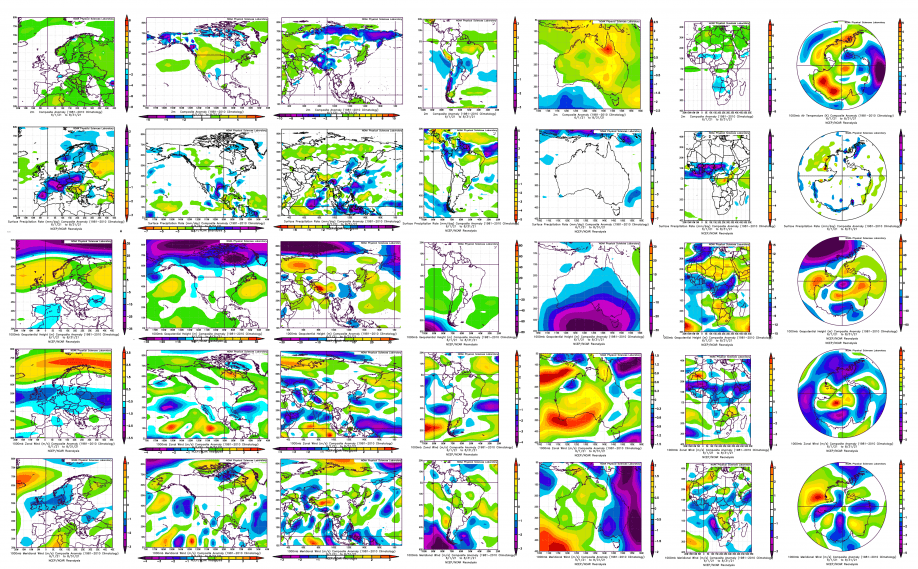 In this special Mkweather article we will look at the last summer and winter in both hemispheres and we evaluate the character of the season according to temperature, precipitation, geopotential (air pressure), and zonal and meridional winds anomalies.

Summer 2021 was in Italy, Balkan, Eastern Europe, and Scandinavia hot, in Italy, Balkan and Eastern Europe dry, while from northern Portugal to Lithuania appeared significant above-average precipitation anomaly, what was in many cases associated with severe storms, floods, or tornadoes. In the Northern half of Europe appeared a positive geopotential anomaly, while Western Mediterranean and the Black Sea regions had negative geopotential anomalies. Zonal winds were weak almost in all mid-latitudes and strong only in Lapland, parts of Turkey, and Portugal. Meridional winds were weak mainly in British Islands, Northern Sea region, southern Scandinavia, Romania, and Ukraine, and strong meridional winds in Italy, western Balkan, Finland, and northern European Russia. Mainly weak winds in the NW sector of Europe could be linked with severe floods potential (Germany) and stationary fronts above the region, with a result of colder and wet conditions.

Heat domes above the northwestern USA and southwestern Canada caused a strong positive temperature anomaly of Summer 2021 in the region. Greenland was warm, but Alaska, Canadian Arctic, and Texas colder than average. Northern USA and western Canada were thanks to these heat domes very dry, Central America returned dry anomalies, too. Western Gulf coast, however, thanks to premature tropical activity, was anomalously stormy. In the northern half of Canada and Alaska, low geopotential anomaly persisted, while East Coast reported positive geopotential anomaly. In northern Canada, Alaska, and Central America, positive zonal winds anomaly appeared, while Florida, the Caribbean, and western Mexico reported weaker zonal winds. Meridional winds were stronger along all East Coast (USA + Canada), above California and western Alaska, such as Canadian Arctic, while weaker meridional winds were reported mainly Nunavut and big areas above Pacific coast and Northern Atlantic.

Warm anomalies were reported mainly from the Middle East, West-Central Asia, southern Siberia, Japan, and the coast of the Far East, northwestern India, and parts of Indonesia. Many parts of monsoon Asia were thanks to La Nina stormier, but western India, and too Tibet and Siberia drier, than average. Above China and Indonesia, a low geopotential anomaly appeared, which should be linked mainly in China with deadly floods. Anomalous low geopotential anomaly was reported from the Arctic in Summer 2021, too. Western Siberia, the Middle East, Arabian Sea, Bay of Bengal, and Japan reported high geopotential anomalies, which should be associated with wildfires or heatwaves in many of mentioned regions. Zonal winds were weaker above the Middle East, West-Central Asia, southern India, the coast of East Asia, the Philippines, and eastern Indonesia and stronger above northern and western Siberia, Taiwan, Bangladesh or Java. Meridional winds were weaker in the southern Arabian Peninsula, West-Central Asia, Mumbai region and Himalayas, Southeastern Asia and Chukotka, stronger meridional winds above northern Siberia, Tibet, eastern India, Japan, and East Asian seas.

Cold winter appeared in moderate and subtropical climate zones in South America such as thanks to La Nina along the coasts of Peru and northern Chile. Eastern Amazon and Fireland were warm. Parts of mainly central Chile and Argentina reported higher geopotential. Near coasts, the Santa Catarina region, southern Brazil, and central Chile appeared weak zonal winds, above eastern and northern Brazil, the neighboring region of Chile with Peru and south-central Patagonia stronger zonal winds. Meridional winds were weaker in Fireland, along the Argentinian coast, and in parts of Colombia, Venezuela, and Peru, and stronger in the parts of Brazil, Bolivia, Paraguay, and central Chile.

Winter 2021 in Australia was paradoxically (La Nina) warmer than average, only southern coasts were a little colder. However, a strong negative geopotential anomaly appeared above the southern half of the continent, with strong zonal winds. Meridional winds were strong in the western and weak in the eastern half.

Surprisingly western Antarctica above, but eastern Antarctica below temperature average. SW sector and Antarctic Peninsula with above-average precipitation, while SE/E and NW sectors dry. Above the continent high geopotential anomaly, around the continent including Antarctic Peninsula, low geopotential anomaly. Above the South Pole, with stronger zonal winds, other parts with weaker zonal winds, meridional winds were divided into sectors.

(Visited 221 times, 1 visits today)
Liked it? Take a second to support on Patreon!