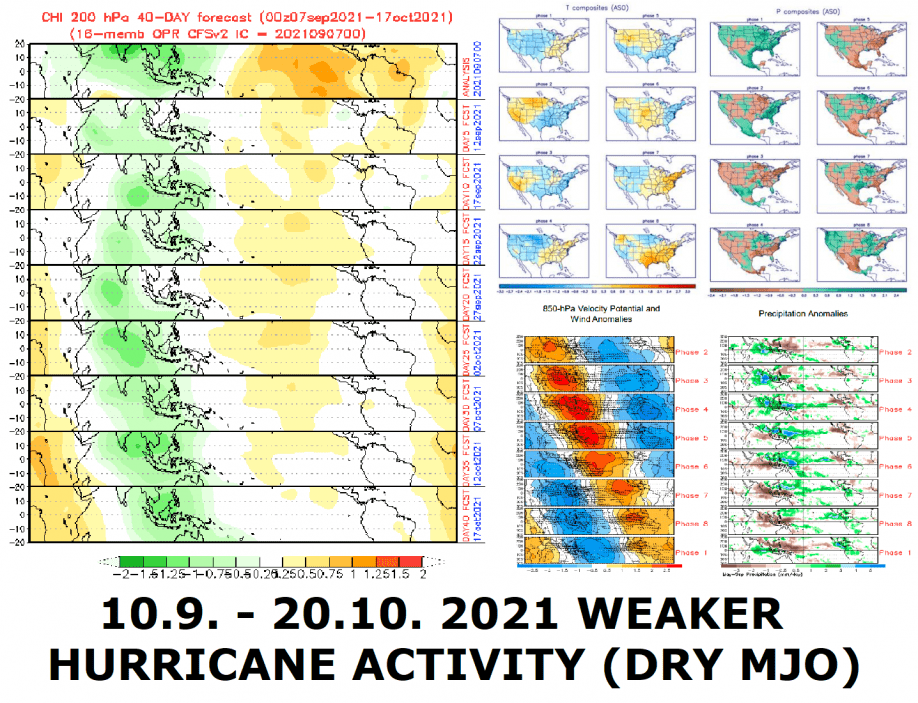 If we neglect major Hurricane Larry, which hits in the next few days Newfoundland and its remnants will be shifting towards Greenland and Iceland, Tropical storm Mindy, which hit already Florida, and the next disturbance near Western Africa, the outlook for the next development of Atlantic Hurricane Season 2021 is relatively favorable, without significantly worse conditions for the occurrence of hurricanes, although, some tropical storms or weaker hurricanes should appear.

Lower activity of hurricanes, tropical storms, and tropical depressions is forecasted according to estimated already between 10. September – 20. October 2021, it means 40 days with the relatively favorable activity of tropical systems above the Northern Atlantic.

During this period, neutral or dry MJO, in phases 4, 5, 6, and 7 is forecasted – these phases are bringing dry anomalies (only phase 7 is starting to be stormy regionally) across southern and eastern USA, while phases 8, 1, 2 and 3 are mostly stormy and favorable for tropical activity development.

A return of wet MJO conditions is gradually possible in the second half of October and the first half of November 2021, with the last powerful round with strong hurricanes and tropical storms of the season 2021.

During neutral conditions (white colors on the first green-yellow output below) however tropical depressions, tropical storms, or even weaker hurricanes should surprise mainly in the Caribbean or in the Gulf Coast, major hurricanes are however less probable such as during the last period at the end of August and in early September with “green” phase.

Moreover, between phases 3-7, a heatwave is usually shifting from Southwest above the central USA and East Coast, therefore, a period of Indian summer is soon above large parts of the USA possible, including north-central and the northeastern USA and neighboring Canada.

(Visited 121 times, 1 visits today)
Liked it? Take a second to support on Patreon!