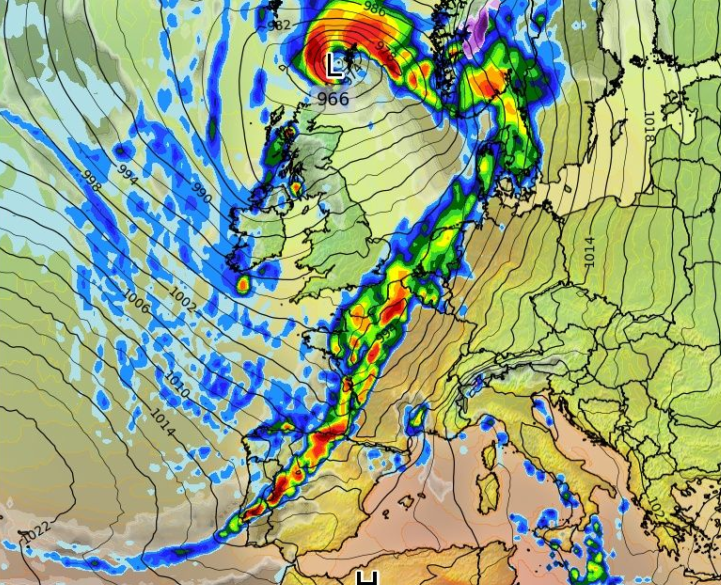 In the last September days, severe storms with floods or hail were reported from parts of southern Europe – mainly Slovenia, Italy, and Spain.

At the weekend, 2.-3. October 2021, the next cold front for Europe is already prepared, with regional severe floods and wind gusts above 100 km/h or hail potential, rarely, a tornado should appear.

In Slovenia, 94 mm / 1 hour fell on 29. September 2021, with a total of 122 mm, which means a 250-year flood for the area. In some parts of the city, cars were flooded up to their roofs and thousands of calls of affected inhabitants were received on emergency services.

From Tuscany, Italy, 8 cm hail were reported only 2 days before, on 27. September 2021 /videos below/, with heavy damages on cars and properties.

Problems with severe storms were reported from the Valencia region, Spain, too, where mainly many crops were damaged.

Currently, the next storm threat is shifting above Europe – a powerful cold front will be long from Portugal in the south to Norway in the north.

Then, Genoa low will create above the Mediterranean, with the next severe storms in southern France, Italy, Adriatic region, Greece, Balkan, Alpine region or even northern Tunisia and NE Algeria.

The next heavy rain events, large hail, gusting winds above 100 km/h, floods, lighting or even rare tornadoes are in mentioned regions possible.

(Visited 42 times, 1 visits today)
Liked it? Take a second to support on Patreon!