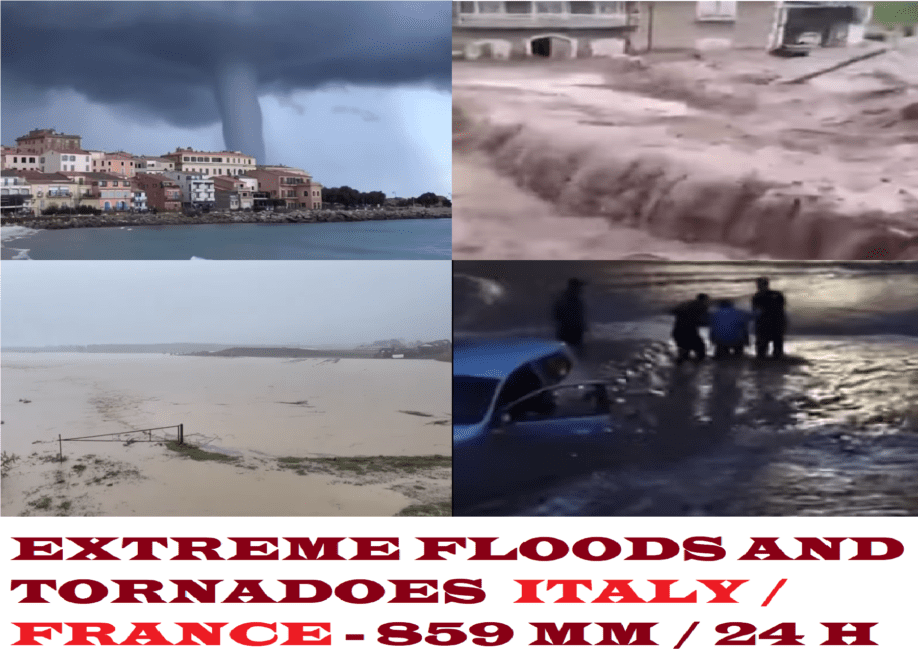 Year after deadly floods in France and Italy are arriving the next catastrophic floods – a Genoa cyclone in southern France and northwestern Italy has triggered anomalous rainfall, floods, and 11 tornadoes, so far!

Within the ESWD database, moreover, 11 tornado reports in Italy and France appeared between 2.-5. October 2021, with one – the scariest incident on the coast of Corsica /videos and Tweets below/.

Marseille received anomalous 173 mm / 24 hours and the city was heavily flooded, too.

The coasts of Liguria and Côte d’Azur were changed into streams of water from neighboring valleys and basins.

In Olbia, Sardinia, 6 cm hailstorms were bothering inhabitants and caused additional damages on properties and plants.

Tornado appeared even directly in Savona, Italy (a larger city with extreme rainfall above).

According to forecasts, a low-pressure system with devastating potential will be shifting until Friday, 8. October 2021 above Adriatic region, Balkan and Greece farther eastward, with a replacing of a heatwave in the region /https://mkweather.com/balkan-expects-30c-on-5-october-all-time-records-have-values-around-32-33c/; https://mkweather.com/germany-275c-munich-07c-from-all-time-october-record-austria-268c-hungary-267c-slovakia-256c-balkan-exceeds-30c-and-poland-25c// by heavy rains, floods, strong winds, and possible tornadoes.

In the southwestern Alps even, heavy snowfall is predicted (Austria, Slovenia, Italy).

If you live in a hit region or region with a forecasted track of a dangerous Mediterranean cyclone, we recommend you watch current weather news, forecasts, warnings, and advisories for better preparedness.