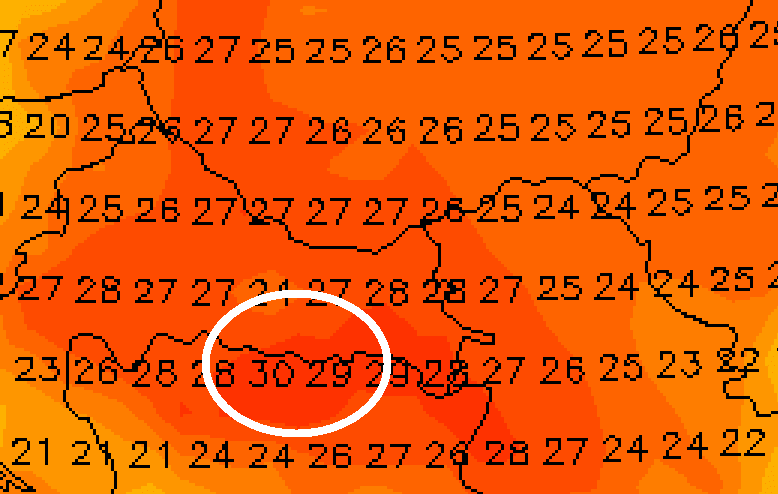 Heatwave will be peaking in the region of Croatia, Bosnia, and Herzegovina, and Serbia around Tuesday, 5. October, with possible temperatures regionally near all-time temperature daily records.

GFS forecasts for the region in northern Bosnia and Herzegovina maximum temperatures up to tropical +30°C on Tuesday, 5. October 2021, which is only 2-3°C below all-time temperature records for the hottest region around Mostar (October record for the city is +32,5°C: https://en.wikipedia.org/wiki/Mostar).

Summer days above +25,0°C in air masses up to +15°C near foehn northward from the Carpathians and Czechian Massif however should surprise a cold Poland, too, Slovakia and Czechia should see the last summer day of the year, similarly.

Hungary, Serbia, and Croatia expect up to +28/+29°C and Italy regionally tropical days above +30°C, however with a powerful Genoa cyclone, with severe storms, gradually /https://mkweather.com/a-severe-cold-front-from-portugal-to-norway-already-at-the-weekend-the-previous-storm-system-brought-floods-and-hail-in-slovenia-italy-and-spain//.

Eastern and southern Balkan will be colder, but summer days, regionally +25/+27°C are possible.

From Turkey, still very hot weather is reported – in the last 24 hours, +35,0°C was measured in Adana on the southern coast.

Summer days very probably won´t return in October 2021 not only in European mid-latitudes but in Balkan and parts of Mediterranean, too, because already the following week (after 10. October 2021), severe coldwave, in lowlands up to -5°C and in valleys up to -10°C is for now forecasted, with only little warmer conditions in Balkan such as continental Europe /https://mkweather.com/severe-frosts-up-to-5c-in-lowlands-and-10c-in-valleys-are-projected-for-continental-europe-soon//.

(Visited 15 times, 1 visits today)
Liked it? Take a second to support on Patreon!