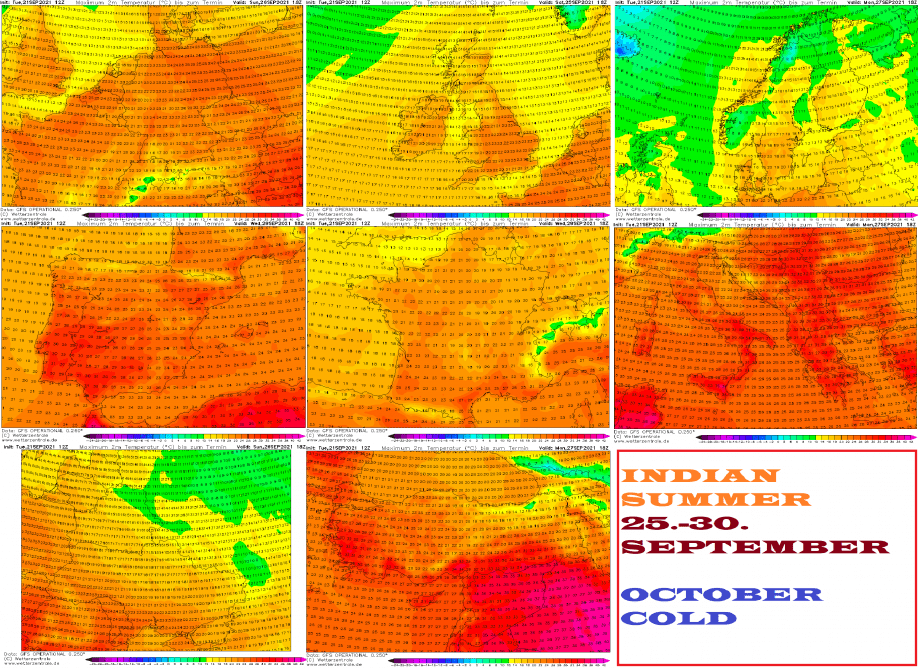 Already in the last article with a warm outlook, we announced an arrival of the next warm spell in Europe, with a possibility of a longer, so-called Indian summer-like weather /https://mkweather.com/the-first-phases-of-indian-summer-in-europe-already-between-25-september-5-october-2021//.

Now, the outlook for October days has changed, but the Indian summer period with warm summer days is staying in forecasts for the period 25.-30. September 2021 for parts of continental Europe.

The last +25°C of the year should be measured in England, around +26°C in Benelux, Central European countries, and +29°C in Hungary is possible.

In southern Turkey, temperatures above +35°C are still possible.

In comparison with this late-summer season period, in October, the next dose of moisture, cloudiness, precipitation and wind and near clear skies probably some frosts or ground frosts, too is according to the newest outpost forecasted, with maximum temperatures +5/+10°C in colder and +10/+15°C in warmer periods.

Period of Indian summer brings in many countries good conditions for activities in the nature, the city, collecting harvest or the last opportunities for late-season vacation in the Mediterranean.

Information about October coldwaves we will confirm and update in the next days, and partially, already in the next Mkweather article /6-week forecast for Europe, North America, and World/.

A peak of warm spell in other regions: