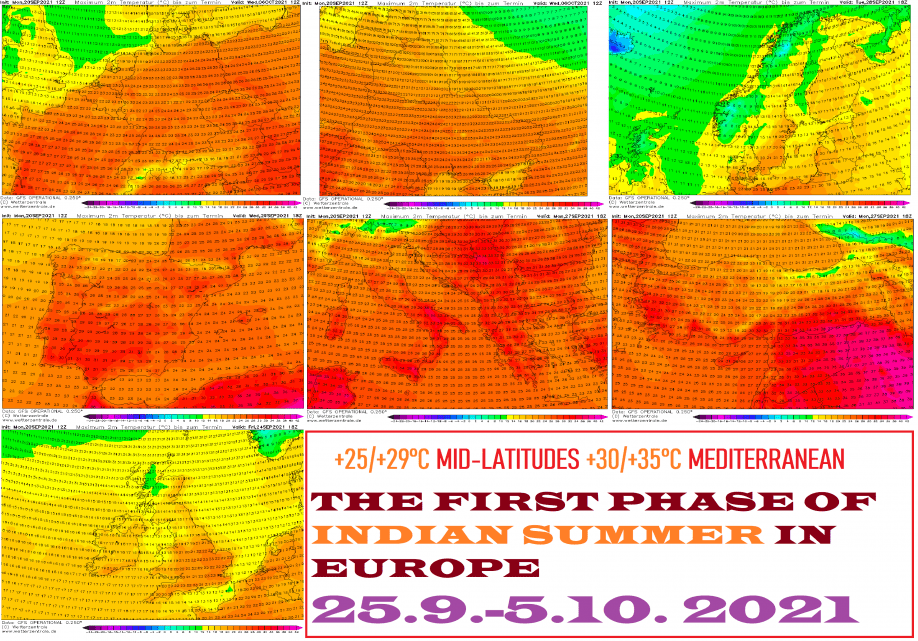 Although a cooldown around 30. September 2021 is still very probable, before this cold front and after it should appear sunny and warm periods in Europe – in central parts with a possibility of summer days, with maximum temperatures above +25°C, in the Mediterranean with tropical days, above +30°C and in southern Turkey even up to +37°C.

Mainly in European mid-latitudes is the weather like this called such as Indian summer.

2 warm spells should arrive after severe coldwave of these days, with rare snowfall below 1000 MASL, frosts, and very low maximum temperatures in parts of Europe /http://mkweather.com/the-arctic-blast-will-be-peaking-on-wednesday-snowing-around-800-masl-maximum-temperatures-3c-and-morning-frosts-in-european-mid-latitudes//.

Already at the end of this week, temperatures around +27°C will appear in western France and +25°C is possible in England.

Gradually, between Sunday, 26. September – Tuesday, 28. September 2021, all Central Europe should enjoy very warm summer weather, with maximum temperatures +25/+29°C (!) in many lowlands and lower situated basins (up to 400 MASL), near foehn winds in Alpine and Carpathian region maybe higher.

Spain and Portugal should report tropical days up to +33°C, Italy and Balkan hot +35°C, and southern Turkey up to +37°C during the period.

Time for cheap, late-season vacation in the hottest parts of the Mediterranean will be temporarily favorable, while in continental Europe, harvest should be collected.