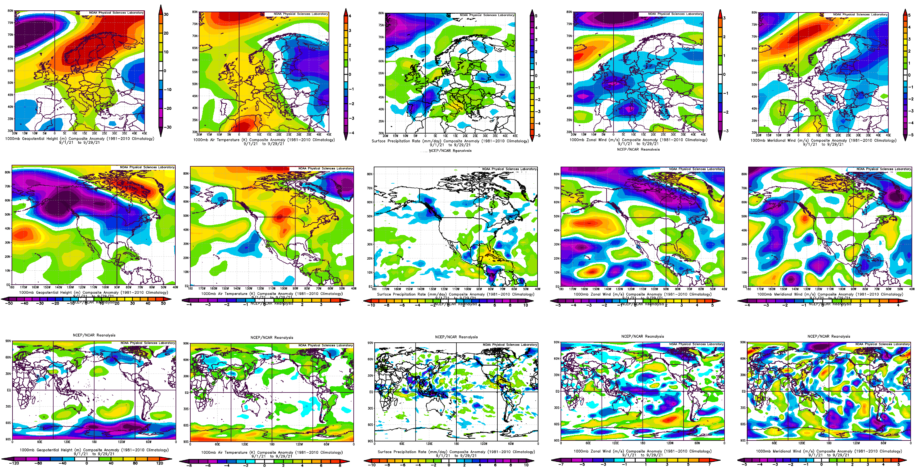 On outputs below are outputted composites for September 2021 in Europe, North America, and World – geopotential (air pressure), temperature, precipitation, zonal and meridional winds.

Blocking high was situated above Scandinavia and on its front side, a very cold anomaly appeared in Eastern Europe, while on its backside, warm weather was persisting. September 2021 was mostly dry, only in Portugal, Spain and France stormy, with many flood events. Zonal winds were mainly in western Europe thanks to blocking high below average, meridional winds were below average in eastern parts of the continent.

Very low geopotential above Alaska and Canada – mainly western parts and partially northeastern USA brought colder times only in Alaska and stormy times mainly in British Columbia. Canada, the USA, Mexico, Central America, or the Caribbean were however mostly warm, mainly Northern Plains and Canadian Prairies, with late-season powerful heatwaves. The Eastern Gulf of Mexico was wetter thanks to hurricane activity, but parts of the Midwest or Caribbean were drier. Stronger zonal winds in eastern and northern USA and southern Canada and weaker in northern Canada and stronger meridional winds in USA and Canada both appeared.