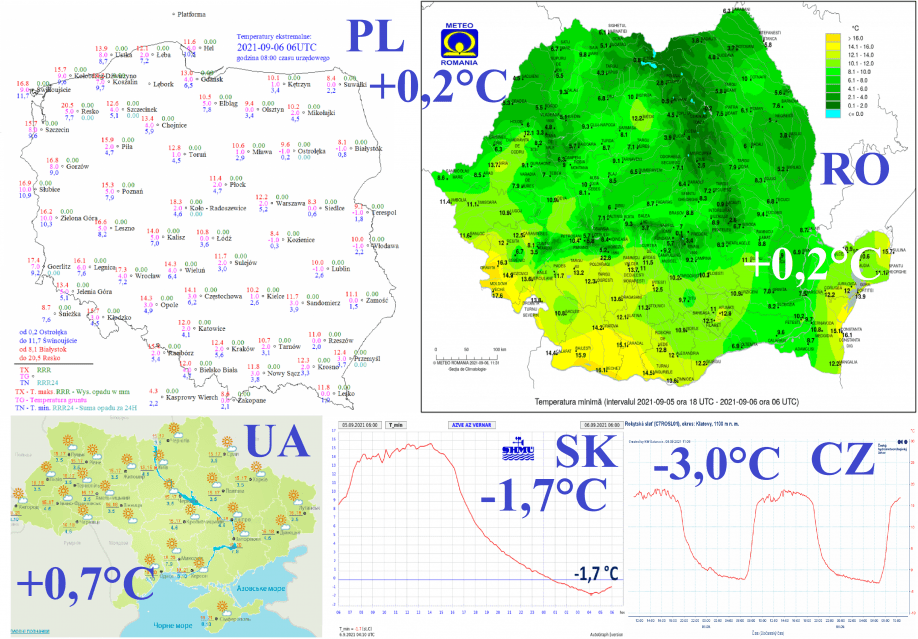 While during late August and early September 2021 coldwave, minimum temperatures thanks to higher moisture didn´t drop below 0°C (only in Czechian basins was measured -1,5°C at the start of coldwave: https://mkweather.com/statistics-the-coldest-measured-temperatures-in-europe-during-the-august-2021-coldwave/; https://mkweather.com/the-extremely-cold-air-is-already-in-southern-europe-greece-61c-north-macedonia-48c-romania-slovenia-34c-croatia-30c-2-3c-above-all-time-august-records/), currently shifted above the region extremely cold and very dry air from Scandinavia with Greenland high origin, which in Norway brought at the weekend powerful frosts up to -8,6°C (Folldal-Fredheim, 4.9. 2021) and in Sweden up to -5,9°C (Naimakka, 5.9. 2021).

In Rokytská Slať, Březník and Horská Kvilda, Czechia, minimum temperatures reached only -3,0°C, which is the lowest temperature of the starting season, so far. These stations are however around 1000-1100 MASL, but interesting temperatures were measured from other countries from lower elevated, densely populated areas, too.

In Vernár, Slovakia (around 800 MASL), the minimum temperature on 6. September 2021 dropped to -1,7°C and the country reported its first frosts of the season. From bigger cities above 50 000 population, +0,1°C was reported from Poprad, under the highest peaks of Carpathians.

In Ostroleka, Poland, the minimum temperature on 6. September according to IMGW decreased only to +0,2°C, Kozienice reported +0,3°C, Siedlce +0,6°C or Bialystok +0,8°C – ground frosts and temperatures tightly above 0°C were reported even in lowlands and it´s possible, that in Carpathian basins, similarly such as in Slovakia, minimum temperatures dropped even lower, to around -2°C.

Miercurea Ciuc, Romania (around 650 MASL) reported on Saturday, 4. September only +0,2°C and it´s possible, that valleys in Romania experienced their first frost days at the weekend, too, because Miercurea Ciuc is the only main weather station in Romanian Carpathians.

Izium in Ukraine surprised on 6. September 2021 with +0,7°C and it´s possible that mainly the Carpathian part of Ukraine reported the first weak frosts of the seasons, too.

Already in the next week, Europe will hit the next extreme coldwave, with the possibility of -15°C temperatures in Scandinavia and -5°C in continental Europe (lower situated regions) – we will update the article with this topic already in the next hours /the latest: http://mkweather.com/northern-europe-15c-frosts-and-snowing-are-predicted-while-continental-europe-from-france-to-ukraine-should-see-2c-already-in-the-following-week//.