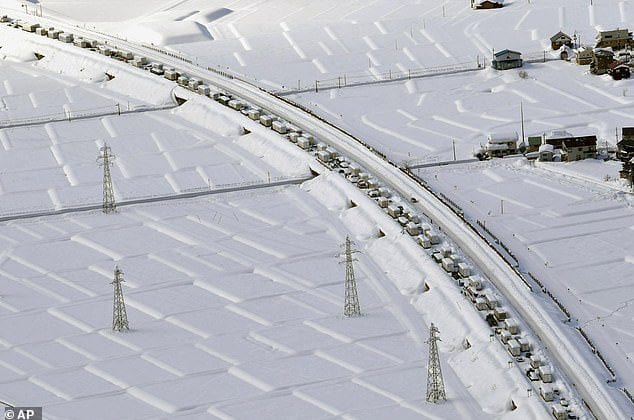 Even worse was situation in more northern parts of Honshu, between Tokyo and Niigata, where expressway, which connects both cities was buried – together with cars, trucks and people – under 2 meters high snowdrifts in some parts.

Extreme snowfall is reported from northern Honshu and Hokkaido, too.

Severe winter conditions are coming after extreme frosts in Siberia and China /https://mkweather.com/2020/12/17/extreme-winter-hit-yakutsk-siberia-58c// and temperature records in South Korea /-23,5°C (and North Korea probably too) – a topic of the next article/.

Media last 48 hours have flooded a news from mentioned highway, where around 1000 people was stucked overnight in Japan traffic jam stretching 9 miles long.

People must alive in snow and ice long 40 hours without water and food and slept in their cars according to many sources.

In Fujisan (3772 MASL), temepratures dropped to -27,8°C on Thursday and many lower regions hit severe frosts up to -15°C and all-day frosts.

Northern Honshu expect -15/-18°C in 850 hPa at the night from Saturday to Sunday and frosts in the coldest valleys around -25°C.

(Visited 81 times, 1 visits today)
Liked it? Take a second to support on Patreon!