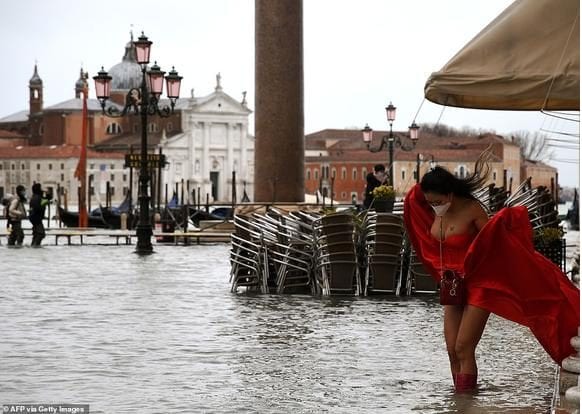 Long-term forecasts until 26. December expect really stormy conditions across Mediterranean and western parts of Europe, while central and eastern Europe will be dry.

In Venice from Wednesday to Thursday, 9.-10. December, has dropped 115 mm of rain, what is double than average precipitation amount for all December.

In Dubrovnik dropped 129 mm of rain during Wednesday, 9. December and parts of Croatia and Slovenia reported regional floods.

Grazalema, Spain reported 104,4 mm of rain on Thursday, 10. December and level of snowing has shifted to 600 MASL in Pyrenees and Central Massif in France thanks to storm Ernest.

Until the Christmas, next 4 Mediterranean storms hit Mediterranean, from Iberia, trough Italy, Balkan up to Turkey and Middle East coast, with last threat around 24. December in Eastern Mediterranean.

Only after the Christmas, situation should become better, with NAO+/AO+ and Azores high above subtropical parts of Europe (and northern Africa and Middle East).

However, such circulation will be shifting from NAO-/AO- to NAO+/AO+ regime, extreme rainfall, storms, floods and blizzards become more frequently in western Europe – in France, Ireland, the UK, Benelux and Norway mainly, with powerful Icelandic cyclones bringing significant worsening of weather.

Central Europe, Ukraine, Belarus and next parts of Eastern Europe, will stay dry / relative dry during rest of month, with expected anticyclonic conditions and possible stronger frosts during nights, but warm, sunny / foggy weather during afternoons.

Forecast for Christmas for Europe, the USA and Canada will be updated on Mkweather already in next articles, therefore stay watch weather with us.