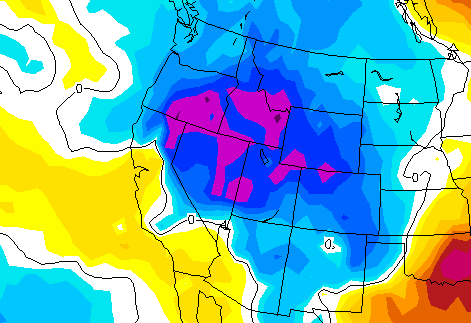 Burned area in California is approaching 5 million acres and the next millions of acres were burning in other states in the West of the USA.

In early October, the next extreme heatwave hit region /https://mkweather.com/2020/09/29/summer-like-heatwave-up-to-111f-44c-in-southwestern-usa-until-10-october-rains-should-bring-later-ex-hurricane-only-to-the-northern-areas-wildfire-risk-at-an-extreme-levels// and wildfire situation has been worsening.

Wind will be limited mainly to regions with rain, therefore, it doesn´t have to be directly bad factor for the spreading of wildfires.

This weather pattern, linked with strengthened Aleutian low area (with a contribution of an ex-typhoon Kujira and ex-hurricane Marie, too) should help stop spreading of wildfires in many areas of the West, according to many American meteorological services.

This short cooldown is needed to use for fight with a fire, because between 14.-22. October, next long heatwave in the region is expected.

According to long-term forecasts, wildfire season in the region should continue thanks to La-nina until December 2020, with devastating impacts on regional ecosystems, communities, air quality and should bring next deadly peaks during next more than 2 months.