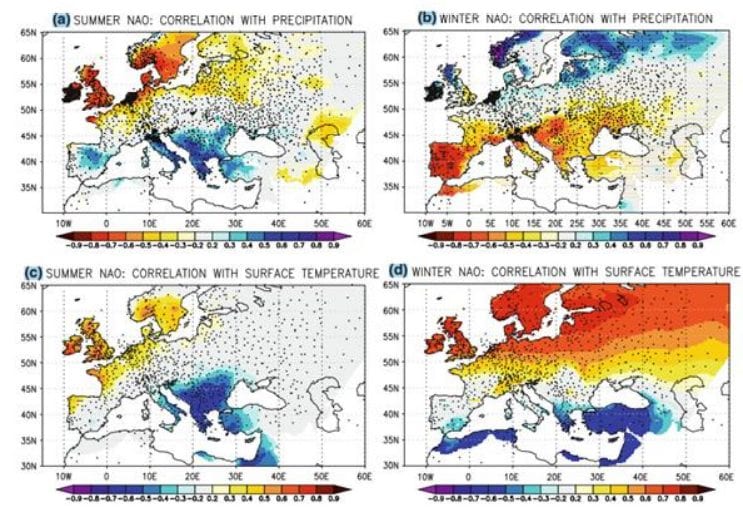 Indian summer will be during last days of October in Europe ended by cold front, linked with ex-hurricane Epsilon /https://mkweather.com/2020/10/26/epsilon-after-alpha-already-the-second-tropical-storm-which-hits-europe-in-2020//, which very tight hadn´t hit British Isles in full power, but only has brought severe winds and rain during Tuesday and Wednesday, 27.-28. October 2020.

However, transition to AO+ phase, and mainly, NAO+ (positive phase of Arctic and North Atlantic Oscillation) in Euro-Atlantic sector will be linked with late-Indian summer conditions minimally until 10. November, in some parts of Europe maybe until the half of the month.

It´s late autumn and NAO has behavior more such as in winter than in summer (see correlation maps below) – with northward position of Azores high above Mediterranean and central parts of Europe and expected warm to very warm conditions in northern latitudes.

Stormtrack will be shifted during next 2 weeks far to the north and pressure highs from Azores will be moving across Europe eastward.

On Monday, 2. November, maximum temperatures should reach +26°C in southern France and +23/+24°C in southwestern Germany. Temperatures above +20°C will be still possible in England, Benelux and Central Europe in early November 2020.

However, valleys, basins and occasionally unfortunately lowlands too, must count with morning frosts, ground frosts will be very often.

Anticyclonic periods will be regionally interrupted by precipitation systems during first November 2020 decade in Europe and possible change should arrive from Siberia between 10.-15. November – on the front side of major anticyclone above northern and central parts of Europe, with maximum temperatures in Poland only around +3°C and strong morning frosts, in Carpathian basins preliminary up to -10°C.

If you have despite of COVID-19 last outside works in the garden or like last warm sun rays, next 2 weeks will be good preparation before long and cold winter 2020/21.

Correlation maps of NAO index and temperatures and precipitation in Europe /Blade, 2012:

Expected maximum temperatures in central parts of Europe during next 16 days /wetterzetnrale.de:

Excepted precipitation in Europe during next 16 days /wetterzentrale.de:

Expected T850 hPa anomaly from long-term average during next 16 days in Europe /wetterzentrale.de: