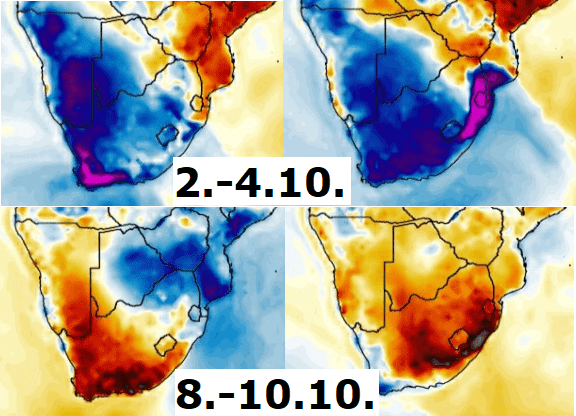 In the last days, a heatwave was peaking in south-African countries.

Another heatwave according to /https://twitter.com/extremetemps/ brought into Namibia, Angola, and South Africa anomalously high temperatures.

Ondjiva, Angola at the same time reported the highest September temperature ever, +39,0°C.

In Potchefstroom, South Africa, +43,9°C on 28. September 2021 was measured and Pretoria reported the hottest September day in history, with a maximum temperature of +36,7°C.

Between 2.-4. October, the next coldwave for the region is forecasted, but around 8.-10. October, a strong heatwave should appear mainly in South Africa.

Still, hotter than deserts in south-African states is surprisingly Sahara, where temperatures up to +46°C appeared in the last days /the next Mkweather article/.