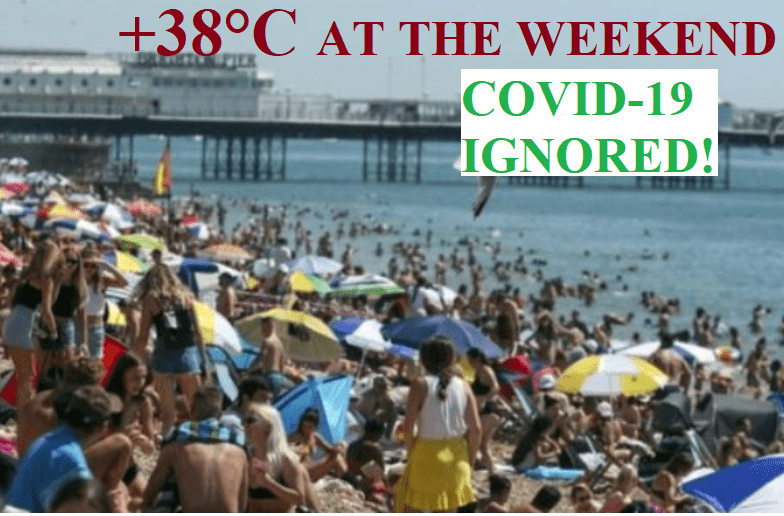 Only week after historical heatwaves there is the next hot spell and temperatures on Friday, 7. August are again anomalously high. In London, Heathrow, maximum temperature reached +36,4°C, in Kew Gardens +36,3°C and it was the hottest August day in UK since August 2003 (when was measured temperature record +38,5°C for August).

Beaches are full now and people have tendency to ignore COVID´19 warnings and restrictions (!) “Crowds ignore all restrictions and warnings and occupies the beaches.” according to British media. Situation is not good in these reflections. At the weekend, temperatures will rise to +37°C on Saturday and +36°C on Sunday in southeastern England, but rarely, up to +38°C is on Saturday possible.

Warm temperatures are also expected overnight, with a number of so-called tropical nights – when temperatures stay above 20C – forecast for the coming days.

Between 1961 and 1990 there were just eight tropical nights which exceeded the mark +20°C. But the mercury is predicted to stay between 19 and 22°C in some areas until next Wednesday night, meaning people in the UK could be facing difficult sleeping conditions for several nights to come.

There is a list of temperature records in England:

Extremely high temperatures on Friday starts to bother other west-european countries too or West Central Europe, respectively. In Spian, Thursday was hotter than Friday (+42,6°C Montoro).

Very hot was in Scandinavian countries, too. +31,6°C was measured in Borris, Denmark and +30,5°C in Goteburg, Sweden.

In southern France, a wildfires starts to destroy a land, many cases are reported from southwest and Côte d’Azur, where temperatures will reach more than +40°C during the next days, regionally.

As we pointed on Thursday, this heatwave will be the longest heatwave in Europe during summer 2020, in central parts of continent with duration almost up to 20. August. Then, first breathes of autumn could come.

Criteria for UK´s heatwave are very slight, heatwave in Scotland is valid above +25°C, in London above +28°C