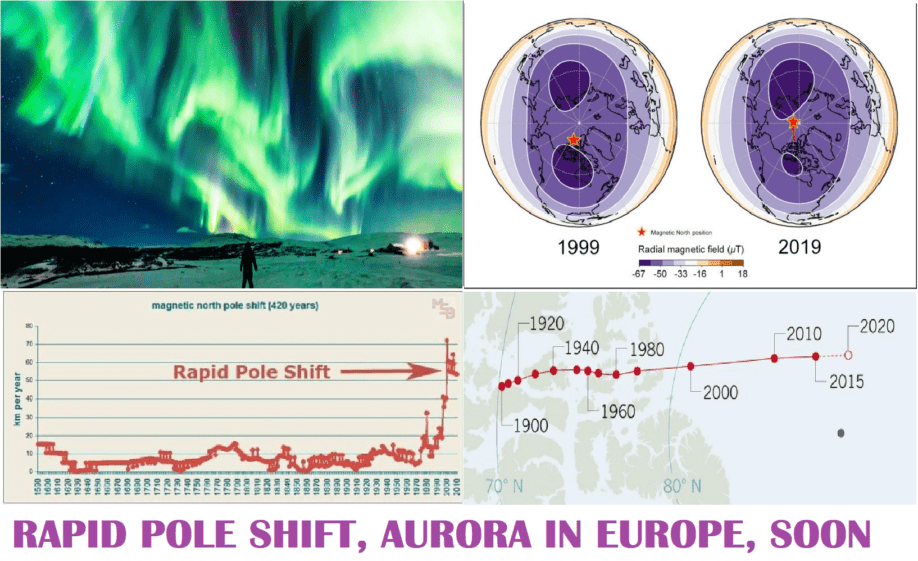 “People in France, Germany, Hungary, or Ukraine were going outside to watch an unseen theatre called northern lights (aurora) after North Magnetic Pole has shifted dramatically from the Arctic above Siberia.“

Not science fiction, but a very possible reality already around the years 2040-2050!

North Magnetic Pole namely, according to NASA, thanks to climate change /https://www.researchgate.net/post/NASA_suggests_magnetic_North_Pole_drift_is_caused_by_climate_change?fbclid=IwAR08HGG2V6ER4YOovuv74MUadyW8nHllYm3D6lFc3nYnXCcpt7m9ceL7rPE/, is shifting rapidly from its usual territory above Asia.

Only in the last year, 2020, it has shifted around 80-times faster than in 20. century, or between the years 1900 – 1980. /https://www.nature.com/articles/d41586-019-00007-1; https://www.visualcapitalist.com/magnetic-north-pole-moving-to-russia/; https://www.dailymail.co.uk/sciencetech/article-6579515/Scientists-warn-Earths-magnetic-North-Pole-begun-moving-erratically-speeds-50km-year.html; https://modernsurvivalblog.com/natural-disaster/alarming-noaa-data-rapid-pole-shift//

Extremely quick shifting of the magnetic pole has started shortly after 1990.

Centuries before it hasn´t shifted for hundreds of years so far, such as in the last recent years together.

Reasons are according to science in climate change and overpopulation-related factors such as land use, melting of Greenland ice cover, or drying of continents.

When the magnetic pole will shift above Siberia until 2050 /https://earthsky.org/earth/magnetic-north-rapid-drift-blobs-flux//; Alaska may no longer see the skylights known as auroras, which might then be more visible in more southerly areas of Siberia and continental Europe /https://www.nbcnews.com/id/wbna10388147/.

A question is if climate change will be continuing and researches have been true about extreme warming, how next will be the shift of magnetic poles, with speculations, if pole swap (magnetic reversal) isn´t closer than we ever thought.

Some studies are telling about a minimal impact of a possible pole swap (magnetic reversal), some are more pessimistic, with a possibility of problems with an ozone layer (a magnetic field is protecting before harmful radiation) and subsequent climate changes across continents. /https://edition.cnn.com/2021/02/19/world/magnetic-fields-earth-intl-scli-scn/index.html; https://www.pri.org/stories/2021-04-19/scientists-link-earths-magnetic-reversals-changes-planets-life-and-climate; https://cosmosmagazine.com/earth/earth-sciences/magnetic-reversal-caused-massive-climate-shifts//

Fortunately, after the year 2100 (maybe longer than 1000 years), and partially already between 2020-2100, very weak Sun activity is forecasted, which should have some cooling contribution into possible global warming, with hypothetical good effects to a shifting of poles.

Moreover, the last magnetic reversal is dated 700 000 years ago and conditions leading to this event should be really extreme.

Despite skepticism or alarmism, it appears, that the 21. and the 22. the century should be quite unexpectedly very adventurous for humanity and science, yet.

(Visited 236 times, 1 visits today)
Liked it? Take a second to support on Patreon!