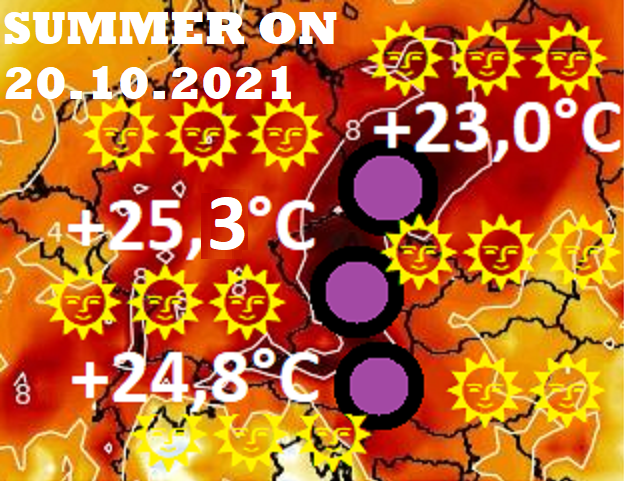 The first peak of late Indian summer in continental Europe is here and some Central European countries on Wednesday, 20. October 2021 reached magical +25,0°C.

Anomalously warm was in Reichenau, Rax, Austria, not so far from Vienna, with +24,8°C, therefore somewhere in Austria, summer day was possible, too (after updates).

Warm weather in Central Europe stays on Thursday, 21. October, yet, then between 22.-26. October will be a little colder, up to +15°C, but at the end of October and mainly early November is prepared for the continent the next, extreme, heatwave, with a possible +25,0°C and more in Central Europe /http://mkweather.com/november-brings-summer-weather-20-25c-in-continental-europe-and-25-30c-in-the-mediterranean//

Indian summer should persist above Europe until 15. November 2021, western Europe should be warmer almost until the end of the month, but forecast models already see the potential for severe frosts in late November (or early December 2021) /material below/.

Mweather will furthermore watch the situation and will be bringing fresh news. Already in a few weeks we will look at the first forecast for Christmas 2021 and the first possible extreme frosts in Europe /https://mkweather.com/winter-2021-2022-forecast-extreme-frosts-in-eurasia-in-december-in-north-america-in-february-early-canadian-stratospheric-warming-ne-pacific-blob-la-nina-qbo-and-shift-from-nao-to-nao-such-le/; https://mkweather.com/winter-2021-2022-forecast-for-europe-early-extreme-arctic-and-siberian-blasts-and-blizzards-late-dry-and-very-warm-conditions//.

(Visited 121 times, 1 visits today)
Liked it? Take a second to support on Patreon!