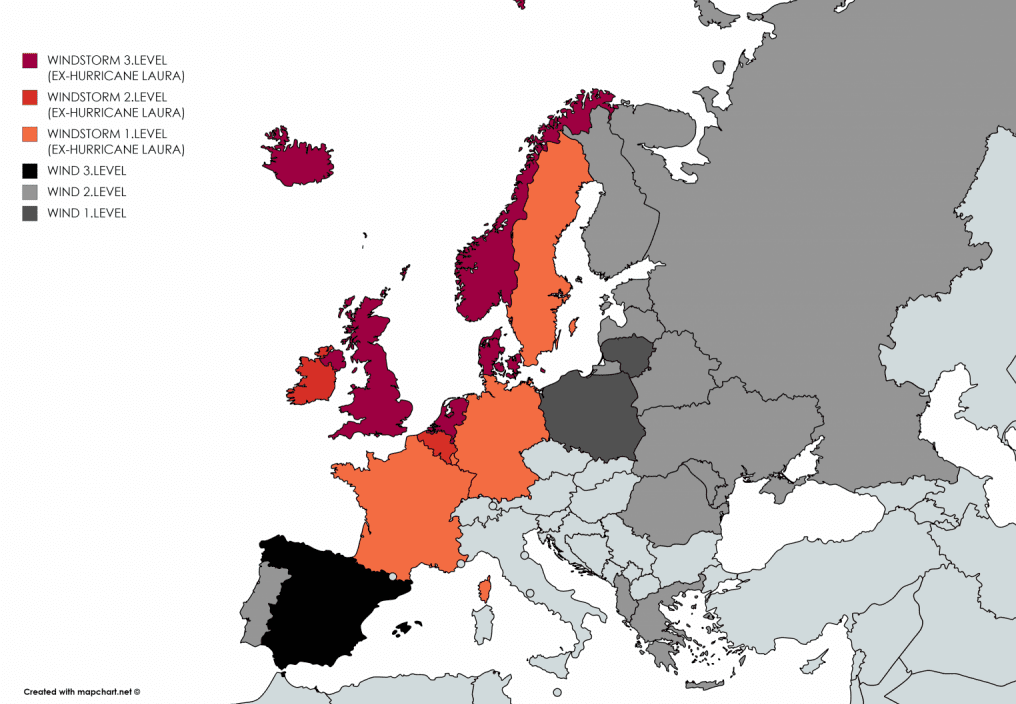 It´s Wednesday, 2. September 2020, early morning, and maximum wind gusts in Cairngorm in Scotland are reaching 107 km/h, only 3 km/h below a threeshold needed to a status of next windstorm:

“The Met Office and UK media generally refer to these storms as severe gales. The current definition of severe gales (which warrants the issue of a weather warning) are repeated gusts of 70 mph (110 km/h) or more over inland areas.“

This robust low pressure system over Northern Atlantic brings severe winds mainly to Iceland, UK, Norway and Ireland on Wednesday but on Thursday, severe winds are expected in Netherlands and Denmark with some winds in northern parts of France, Belgium and Germany too.

Windstorm is linked with remnants of ex-hurricane Laura.

On Wednesday is above Europe still cold air, which has arrived after cold front during last days. Before an arrival of windstorm´s cold front to the southern parts of Europe will be little warmer around Friday, but after transition of cold front will be again cold, only with maximum temperatures +15/+20°C (59 – 68°F) above W/NW and Central parts of Europe on Sunday, 6. September – similarly such on Wednesday.

During next week, dramatic changes could appear in Europe, with extremely cold air above Atlantic and possibly last bigger heatwave above continent for few days.

Maximum temperatures over Europe from Wednesday to Sunday 2.-6. September 2020 /wetterzentrale.de