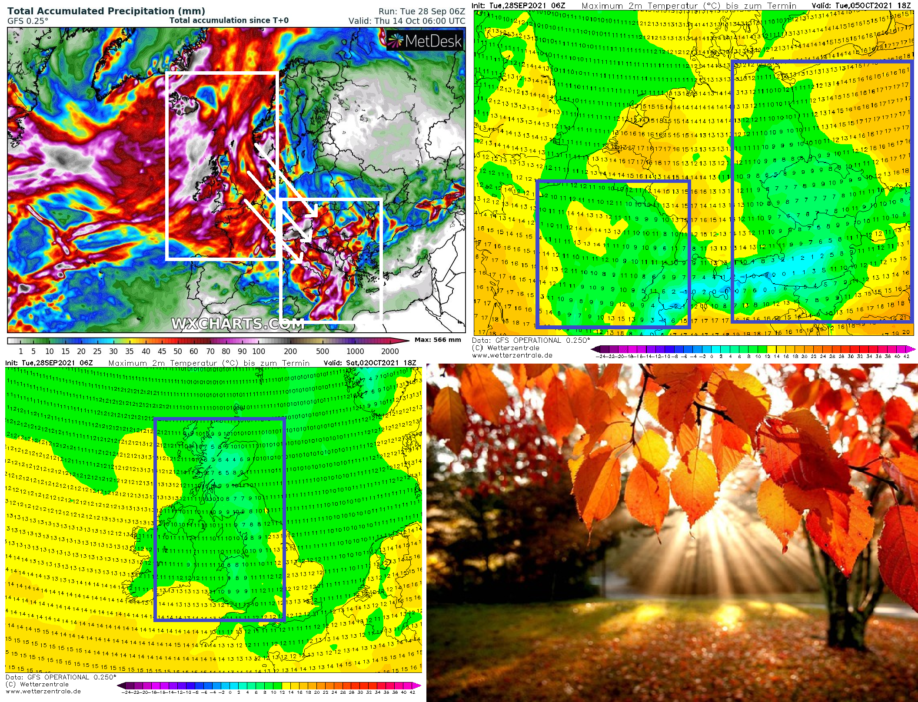 Outlook for the first half of October 2021 is colder, without an Indian summer in mid-latitudes, but too without snowfall in lower elevated regions, too.

While in northeastern Europe, thanks to dry weather, severe frosts should appear, from northwestern Europe above Balkan and Central Mediterranean will be shifting during this period strongly developed low-pressure system, with heavy rains, storms and risk of floods in some regions, mainly in NW and SE Europe and their contact point in the region of Alps and Genoa Bay.

Indian summer above +25°C, maybe above +20°C is excluded in many parts of mid-latitudes and during colder period, days with maximum temperatures regionally only +5/+10°C should appear not only in Scandinavia and British Islands, but too in Central Europe and temporarily even France, northern Spain, Balkan, Eastern Europe and NE Turkey (in Turkey remnants of September coldwave, then hot).

Frosts and ground frosts should appear mainly in northern and eastern regions, where will be drier, west and south will to dispose of a lot of moisture.

Blizzards should appear in Iceland, while southern Spain, Portugal and Turkey will be still situated in a hot, tropical air, with temperatures above +30°C and late-season vacation possibility. In Italy, Balkan and Greece will be situation more dramatic and storm-related phenomenas should appear, including heavy rains, wind gusts, hails, lighting, floods or tornadoes and waterspouts.

Basins and valleys in dry sectors should taste fogs and low cloudiness, what should be regionally the next cause of lower daily temperatures.

In the second half of October, when cyclonic system from west should shift above eastern parts of the continent, should be colder, and – the first snowing in lower situated regions should regionally on its backside appear.

At all, relatively stable, although in NW and SE sector of Europe stormy weather is in the first half of October 2021 forecasted. Stable will be mainly temperatures – without extremely warm days of Indian summer, but without severe frosts, too. Lower daily temperatures should make impression of cold weather, in comparison with previous months and heating season will start definitely in many warmer parts of Europe.

(Visited 178 times, 1 visits today)
Liked it? Take a second to support on Patreon!