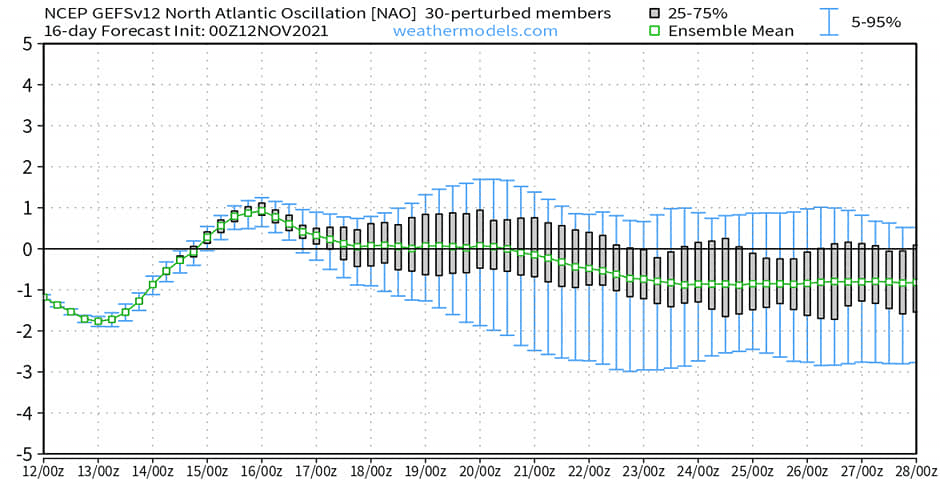 Forecasted winter conditions are confirming – not only in medium-range forecasts /https://mkweather.com/arctic-winter-in-europe-already-betwen-22-27-november-central-europe-france-spain-and-the-uk-20c-scandinavia-30c//, but mainly in long-range forecasts, which expect a possible very early peak of Winter 2021/2022 already between 20. November – 20. December 2021!

While in Northern Hemisphere, a persisting AO-phase (negative phase of Arctic Oscillation) is expected, for the European sector will be a very important behavior of NAO (North Atlantic Oscillation).

Already in late November 2021, the NAO index should drop extremely low, around -1, which should mean extreme Greenlandic, Arctic, and Siberian frosts in the mentioned period, approximately a month before Christmas.

The negative phase of NAO is associated with a shift of stormtracks of weakening Icelandic cyclones above the Mediterranean, while Azores high is very weak, too, with a result of Mediterranean lows, snowing in lower mid-latitudes and outbreaks of extremely cold air from northern latitudes across mid-latitudes and moderate, rarely even, thanks to cold fronts, in tropical climate zone.

A significant re-building of pressure systems is evident just near NAO index -1 and lower when record winter is coming into many parts of continents in the Northern Hemisphere.

E.g. between 23.-28. November 2021 is forecasted NAO index tightly near -1 and in the previous article, we have already announced a powerful, -20°C coldwave in continental Europe and even Spain and the UK and -30°C coldwave in Scandinavian countries just for the same period.

Usually, however, extreme winter is coming a few days (some period) after a decline of NAOi, thanks to much feedbacks in the climate system.

Although, a very cold period is coming more slowly, such as many of us are able to tolerate, all indications are saying only one – early winter will come soon, therefore, will be prepared and stay warm and informed.

(Visited 441 times, 11 visits today)
Liked it? Take a second to support on Patreon!