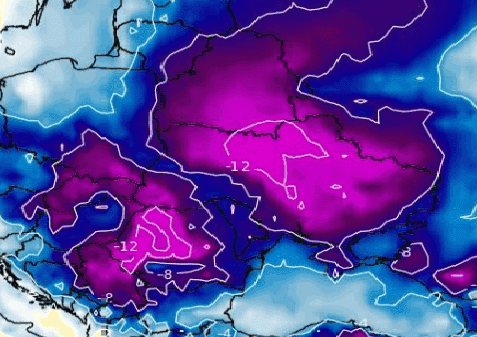 Last time we were informed about the extreme cold blast, which was forecasted to hit parts of Europe before a few days /https://mkweather.com/maximum-temperatures-only-3c-and-the-first-snowing-around-800-masl-in-central-europe-already-next-week//, now we should update forecasts, which were little changed.

The absolute peak of the coldwave will come already in 48 hours, on Wednesday, 22. September, with the coldest densely populated and lower situated regions in the Carpathian basins and valleys, with maximum temperatures only up to +3°C.

Before, but too after extremely cold Wednesday, clear nights with frosts up to -3°C should appear in East-Central Europe, Eastern Europe, and Balkan in frost basins and valleys.

Just these air masses are currently shifting into the heart of Europe and even more southern – above Balkan, Greece, Turkey, and Cyprus, where the holiday season will prematurely end.

Heavy snowfall is already reported from the Alps, Dinaric Mountains, Scandinavian Mountains, and snowfall will appear in other Balkanian high mountains, Caucasus, or even in Belarus and Russian mountains and probably too in Slovakian and southern Polish basins and valleys around 800 – 1000 MASL.

Temperature anomalies in 2 m and 850 hPa rarely reach above the eastern half of Europe more than -16°C from a long-term average.

Very cold weather is forecasted to persist minimally until Friday, 24. September, in Eastern Europe and Turkey until Sunday, 26. September and then, the next powerful warm spell is for continental parts forecasted /one of the next Mkweather articles/. This warm spell should be a little longer such was forecasted, maybe until 5. October.

Don´t forget to dress warm and watch the worsening virological situation, for collecting harvest will be probably good a period between 25. September – 10. October 2021, yet.

(Visited 172 times, 1 visits today)
Liked it? Take a second to support on Patreon!