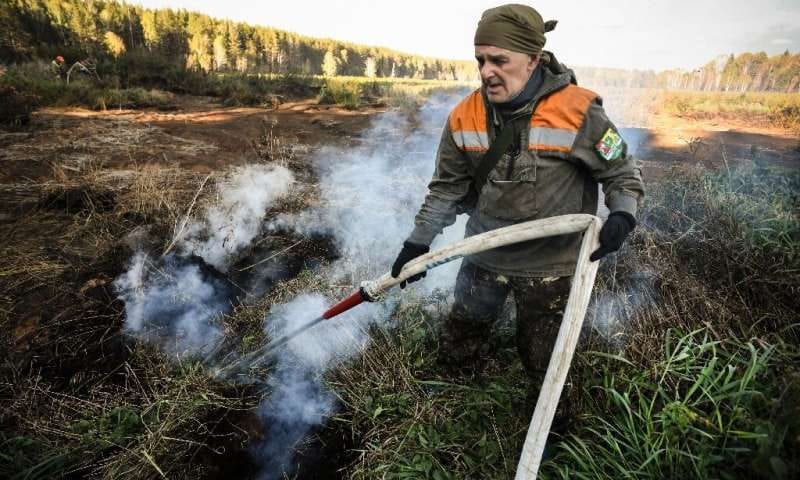 In Russia, everything is possible.

A winter-resistant, underground blaze is a new growing problem in Russia. These fires, called too a “zombie fires” or a “climatic bomb” are surviving cold or wet conditions in the winter and can explode, when weather is dry and warm during warm spells.

The vast bogs topped with nettles and hemps surrounded by a thick pine forests are an ecosystems producting this type of fires. They are situated mainly in Northern Siberian forests.

A peat — the fuel which is formed by the slow decomposition of organic matter in humid environments, is with underground blaze surviving for around five years.

Lying one meter under earth´s surface, the fire is surviving extreme Siberian winters and thanks to droughts it is resistent to groundwater, which lies in lower levels thanks to growing droughts caused by rising temperatures in the region.

Lot of these fires in linked with human-driven factors. Fires should return from dead to alive by igniting grass above the surface during warm weather.

Situation can be even worse in the summer – e.g. after extreme temperatures (+38,0°C) in June 2020 in Verkhoyansk /https://mkweather.com/2020/07/12/38c-101f-behind-polar-circle-in-siberia-5-years-after-unprecedent-event-with-40c-104f-in-nunavut-northern-canada//, when wildfires in region devastated area the size of Portugal. Immediately after start of hot and dry period in the region, tundra fires appered near Verkhoyansk. Extensive fires bother the Russian taiga and tundra every year, and situation is year-to-year worse. In 2019, Siberian fires were linked with campaign “We are choking” and Russia must declare state of emergency during second half of summer. In 2020, situation was even worse: Arctic Russia released more carbon dioxide (CO2) in June and July 2020 alone than in any complete fire season since 2003 (when data collection began).