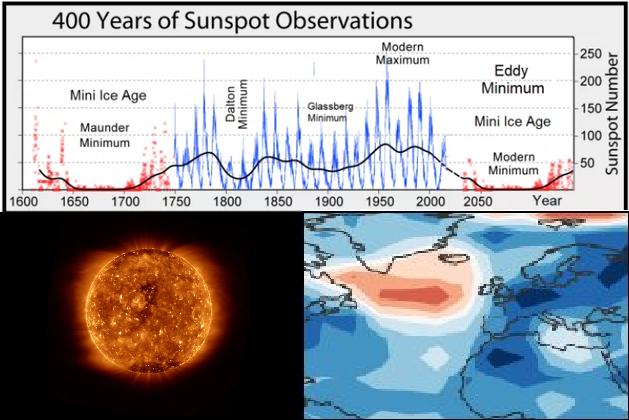 The forecast for the current solar cycle is saying, that it will be the weakest minimally of the last cca 100 years (since 1915). More pessimistic scenarios are saying about the weakest 25th solar cycle in 200 years – since Maunder minimum.

What is however more disturbing is, that during 21st century is gradually by more and more models forecasted “Eddy Minimum” – a modern minimum which is often linked with speculations about Mini Ice Age.

What really happens no one knows, because in last decades we had here extremely strong global warming trend, which is only around 2021 slowed down thanks to La nina, solar cycle minimum and stronger volcanic activity.

Colder weather global pattern is forecasted to stay here minimally until 2022, then, in 2023-2025, strong El nino, with very hot Earth should appear again.

The second question is, what will be a result of a combination of weak Sun with CO2 emissions and extreme global warming trend.

Global warming should be weakened or even, cold conditions, such as during Maunder minimum is possible?

The Maunder Minimum, known as the “prolonged sunspot minimum”, is period cca 1645 to 1715 during which sunspots became exceedingly rare.

The Maunder Minimum is strongly correlated with the middle part of the Little Ice Age, during which Europe and North America experienced with very cold weather.

E.g. from Denmark to Sweden in winters was possible to cross past the frozen sea, northern part of Adriatic Sea was frozen, Europe and North America were experiencing with widespread famines caused by extreme frosts, coldwaves and weak harvests, vineyards were in many parts destroyed:

1350 the Vikings leave their western settlement in Greenland

1500 vineyards in England cease to be grown August

1588 a great storm brought destruction to a larger number of ships of the Spanish army, which thus accelerated its defeat in the clash with the English fleet

1580 – 1600 significant decline in wine production in Switzerland, Hungary and Austria

1740 At the beginning of the year, Paris suffered 75 days of severe frosts, which led to a sharp rise in food prices

1812 – severe frosts in December 1812 accelerated the defeat of Napoleon’s army during his military campaign in Russia, then temperatures dropped to −37,5°C

1841 – 1851 more than one million people die in a “great famine” in Ireland caused by a combination of changeable weather, potato disease and dependence on a single crop

Although so extreme cooldown such as in Maunder minimum is highly not probable, still are staying here unanswered questions, what is waiting us during the next decades.

According to Mkweather opinion, if the next solar cycles in 21st century will be really extremely weak, it should have some contribution on global warming slowdown – it means, milder scenarios of climate change will be adapted.