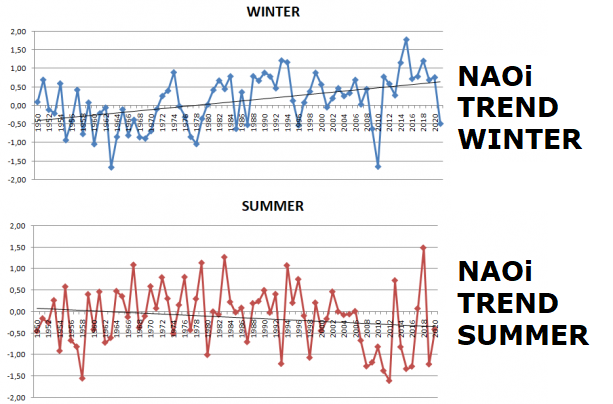 During last 72 years, since 1950, winters were becoming more NAO+, while summers were more NAO- during the time.

This trend has strengthened in last decade, mainly after year 2010, when all years brought NAO+ winter months. 11 summers after 2006 (until 2020) were on the other hand NAO-.

NAO+ in winter means very warm conditions for Europe and cold for parts of eastern Canada and Great Lakes region.

NAO- summers mean more strong heatwaves during the summer in Europe, however, if is index very low, it should mean many storms and extreme rainfall, too.

It is not fully clear, if the next summer will be NAO+ or NAO- : above Northern Sea is expected dry anomaly, while continental Europe should be more stormy.

Action center of NAO+ circulation pattern is however in summer westward from British Islands (not northward) – and it is Azores high, not cold Greenland high.

Springs have tendency to becoming more NAO+, while autumns more NAO-. On autumn is interesting mainly October, with around 70% NAO- Octobers after 2000 thanks to Arctic change.

According to ECMWF, more NAO+ June and August and NAO- July, September and October (and NAO+ November) are in outlook – NAO- in July should be linked with expected peak of Summer 2021 between 10.-30. July in CFSv2 Mkweather experimental forecast /https://mkweather.com/experimental-cfsv2-forecast-for-summer-2021-in-europe-heavy-storms-short-peak-in-july-and-early-autumn-in-august-2021//.

NAO- in summer is bringing low-latitudinal pressure lows above Azores, which will causing extreme tropical advections from Sahara above continental Europe on their front sides. However, British Islands, Scandinavia and NW European coasts are during NAO- colder and very stormy (oppositely such as NAO-).

Correlation maps of NAO index and temperatures and precipitation in Europe /Blade, 2012:

(Visited 57 times, 1 visits today)
Liked it? Take a second to support on Patreon!