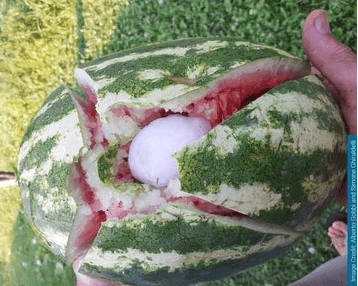 While in Greece, anomalous +47,1°C was on 3. August 2021 measured /https://mkweather.com/greece-471c-only-09c-below-european-record-north-macedonia-441c-bulgaria-425c-and-tirana-albania-422c-all-time-record-while-wildfires-are-raging-across-all-mediterranean//, Sweden, after a cold front already reported -1,5°C, the UK +2,7°C and Spain +6,0°C day before /https://mkweather.com/autumn-has-arrived-soon-sweden-15c-the-uk-27c-spain-60c-cold-will-be-all-workweek//.

Between these diametrically different air masses, a powerful frontal boundary above continental parts of Europe has been created, with the result of extreme hailstorms in parts, where hot air from Italy and Balkan is meeting with cold air masses.

The worst situation was in the last days in northern Italy, where extremely large hailstorms were reported. Large hail was smashing and breaking everything, including harvest in the garden, cars on motorways, or property.

Heavy rains on the frontal boundary in Graz, Austria, caused regional flash floods, and a few days earlier, before a severe cooldown, problems with floods caused by severe storms were reported from Sweden, too.

According to ESWD, the worst situation associated with transitions of the frontal system is from the last days reported from Spain, southern France, the northern half of Italy, the Alpine region (Austria, Switzerland, Bavaria), Poland, Moravia, Slovakia, Hungaria, western Ukraine and already northern Balkan too (from Croatia to Romania). Storms appeared in European Russia and northern Belarus, too.

According to the 16-day storm forecast, the next powerful storms are expected in Ireland, Scotland, France, the Alpine region, Benelux, western Germany, Carpathians, Eastern Europe, parts of Scandinavia, and the eastern Black Sea coast until 20. August 2021.