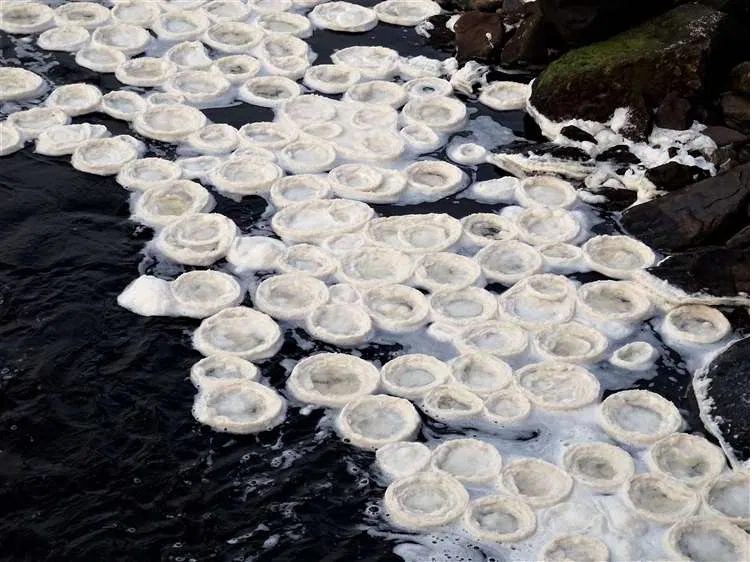 Rare phenomena of ice pancakes were in the past found mainly in Baltic and Canadian coasts, in Scotland are relatively rarely.

“The discs typically form in areas where there is some water movement and air temperatures just below freezing. They have also been observed in oceans where the pancakes can take on enormous proportions and individual slabs can ride over each other in a process called “rafting”. Over time, the individual pancake ice slabs can freeze together to form a solid ice sheet.” /https://www.sott.net/article/446544-Unique-and-rare-phenomenon-reported-in-river-in-Scotland/

During last, extremely cold period in the UK, they have surprised again, now in Dunbeath Strath cottage in Scotland.

Pancakes were concentrated on shores of local rivers and unusual phenomenon was immediately photographed and sent into Met Office.

During the first days of 2021, the first time in history were valid Met Office “code red” warnings before extreme snowfall. It has been confirmed “Beast from the East” event and some forecasters predict, that this winter should be the coldest in the UK in history /https://mkweather.com/2021/01/05/the-uk-red-warnings-before-snow-the-first-time-in-history-the-coldest-days-minimally-since-2012-interval-15-20c-expected-to-reach//.

Extremely cold weather has bothered British Islands since Christmas 2020 and anomalous cold period will end around Monday, 11. January 2021, with last frosts. Then extreme frosts should return around 20. January 2021.