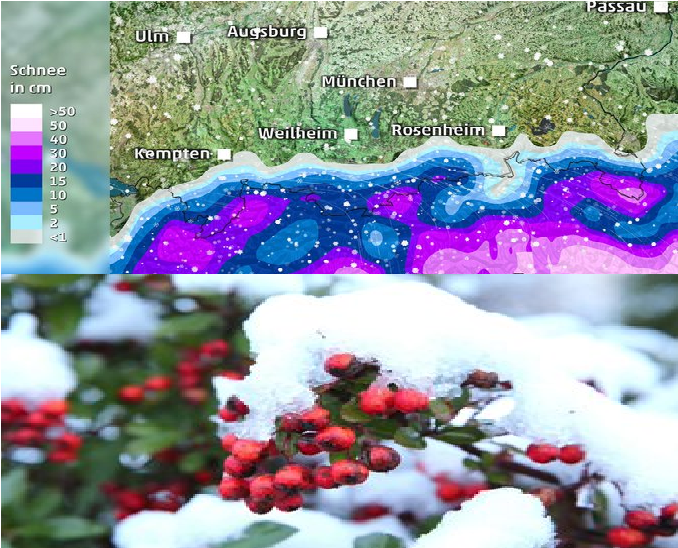 Already in the next hours will be shifting through Germany, Czechia, Poland, Benelux, the Alps and the UK from the north a severe cold front, which should bring regionally the first snow of the season and subsequent severe frosts in the Alpine lower situated basins and valleys.

While in Germanian (and Alpine) mountains around 1000 MASL, 10-40 cm snow cover is possible, snowflakes should appear even lower, around 400-600 MASL /https://www.novinky.cz/pocasi/clanek/na-nemecko-se-vali-snih-dorazi-i-do-ceska-40374610; https://www.bild.de/video/clip/news-inland/bis-zu-9-grad-schnee-schock-trifft-deutschland-hart-77927868.bild.html?wtmc=twttr.shr#fromWall; https://www.merkur.de/welt/wetter-deutschland-experte-prognose-vorhersage-winter-ankuendigung-schnee-kalt-91043238.html; https://www.focus.de/wissen/natur/meteorologie/erster-schnee-ausserhalb-der-alpen-winter-kommt-schon-diese-woche-polarluft-flutet-deutschland_id_24315859.html/ and maybe rarely in lowlands!

Previous GFS outputs were colder, with widespread snowing in western and central Germany, the newest outputs expect mostly storms, which should turn into mixed precipitation or snow showers, later during the night from Tuesday to Wednesday, 12.-13. October, regionally.

Snowing in lower situated areas in Czechia, is possible, too.

Temperatures after a shift of cold front southward should drop in valleys in the Alps and in Czechia below 1000 MASL up to -10°C again /https://mkweather.com/czechia-102c-romania-69c-ukraine-59c-slovakia-55c-belarus-52c-lithuania-50c-the-first-severe-frosts-are-here//, lower situated lowlands should surprise with frosts around -3°C.

Snowing will probably appear in southern Poland and northern Slovakia at levels above 500 MASL, with subsequent frosts up to -8°C in valleys in the next days.

An alpine region in Switzerland, Austria, northern Italy, and southeastern France will receive dozens of centimeters of snow, including areas below 1000 MASL, and valleys with a deep snow cover will report severe frosts, up to below -10°C.

After the cold blast, Indian summer should return earlier, than was forecasted – already from 20. October should surprise summer +25°C in France, Germany, and Hungary and warm +23°C in Poland, Slovakia, Austria, Czechia, or Switzerland /one of the next Mkweather articles/.