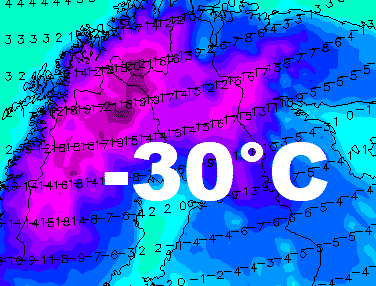 Although is there a possibility, that Arctic blast in continental Europe and British Islands will be a little milder, in the central parts of the continent with -10°C in valleys, GFS still projects record frosts for northern and central Scandinavia /forecasts mostly agree with https://mkweather.com/extreme-frosts-close-to-30c-in-scandinavia-are-forecasted/, or for Lapland are even colder/.

In northern Norway, northern Sweden, and northern Finland, morning frosts up to -30°C (-22°C on outputs) are very rarely possible around 22.-23. October 2021, which are temperatures at the level of October records!

The large region should be hit by extremely cold Arctic days, with maximum temperatures rarely below -15°C!

Some of these records should be in a danger, or, the lowest maximum October temperatures ever should be regionally measured.

The situation on the roads is expected to significantly worsen, the virological situation should be bad and autumn-like outdoor activities will be temporarily impossible to practice.

Meanwhile, in Central Europe, heavy snowfall hits already soon higher elevated basins and valleys, up to 1000 MASL, with possible rare subsequent frosts on snow cover up to -10°C and dozens of centimeters of snow in areas tightly below 1000 MASL, regionally /https://mkweather.com/germany-czechia-poland-slovakia-austria-and-switzerland-expects-the-first-snow-below-1000-masl-40-cm-snow-cover-and-10c-in-valleys-snow-possible-in-lower-areas-too//.

Frosty weather should persist in northern Scandinavia almost until the end of October 2021, but gradually, from the southwest, the last and very long period of Indian summer will come /https://mkweather.com/20c-in-northern-25c-in-southern-mid-latitudes-in-november-2021-untraditionally-late-indian-summer-for-northern-hemisphere-is-confirming//.

Many parts of Scandinavia should find themselves under the snow in the next period and blizzard conditions should arrive shortly before extreme frosts.