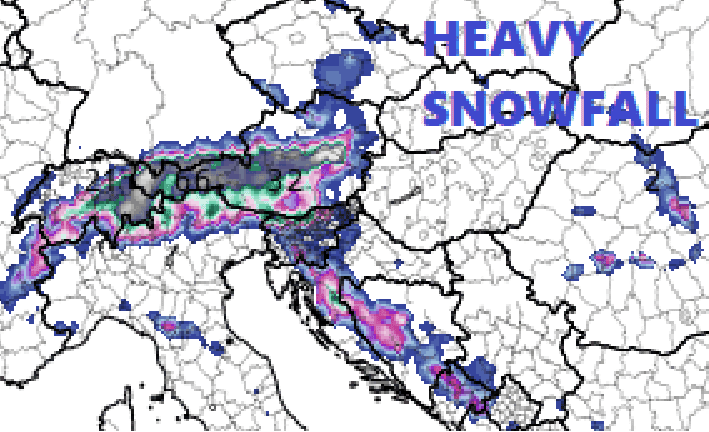 In the last articles we were informed about snowfall and frost events from the beginning of the current coldwave in Europe /https://mkweather.com/northern-sweden-with-81-cm-of-snow-stockholm-the-first-frost-of-the-season/; https://mkweather.com/the-first-snow-in-carpathians-lodz-poland-lowlands-almost-frost-07c// and previously, we forecasted, that a peak of coldwave, with a possible snowing in lower situated areas below 1000 MASL and frosts around -3°C should arrive already around Wednesday, 22. September 2021 /https://mkweather.com/the-arctic-blast-will-be-peaking-on-wednesday-snowing-around-800-masl-maximum-temperatures-3c-and-morning-frosts-in-european-mid-latitudes//.

According to tropicaltidbits.com forecast tool, blizzard conditions are forecasted in the Alps – mainly Austrian parts already in the next hours and days, with a possible snowfall around 1 meter of fresh snow, regionally.

Many Alpine resorts already reported dozens of centimeters of snow on Tuesday, 21. September 2021.

Heavy snowfall should surprisingly hit parts of the Dinaric Mountains, Carpathians, or the northern Apennines, too, and snow should occur according to the newest estimates in lower situated basins below 1000 MASL not only in Slovakia or southern Poland but too in Czechia and the Alpine region.

Maximum temperatures during Wednesday should rarely in regions below 1000 MASL in Central Europe reach unseasonably +3°C, maybe in some important cities around +5°C.

Simultaneously, frosts up to -3°C, on snow cover in the Alps maybe -5°C should appear in some populated valleys below 1000 MASL.

According to Severe Weather Europe, climate change is responsible for an interesting phenomenon – in recent years, a few glaciers had a positive mass balance and this trend could persist in the future, leading to glacier stability in few marginal Alpine sectors.

(Visited 104 times, 1 visits today)
Liked it? Take a second to support on Patreon!