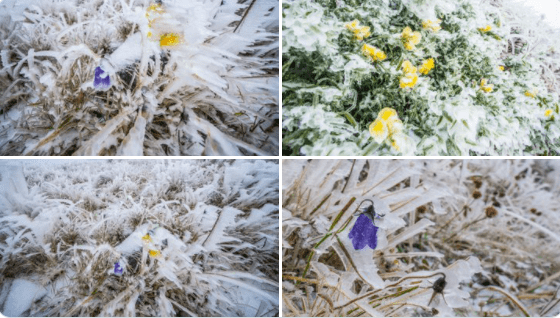 Already early this week, higher elevated parts of Carpathians received the first snowfall, while in the next hours, until Wednesday, 22. September 2021, the first snowflakes of the season should appear in lower situated areas around 800 – 1000 MASL /https://mkweather.com/the-arctic-blast-will-be-peaking-on-wednesday-snowing-around-800-masl-maximum-temperatures-3c-and-morning-frosts-in-european-mid-latitudes//.

The illustration photo is from Kasprowy Wierch, Poland, 1991 MASL (source: Twitter IMGW) – the temperature at the station in the last hours dropped to -4,4°C and ice day with the maximum temperature only -1,1°C appeared on Tuesday 21. September 2021.

Frosts appeared not in Slovakian and Polish valleys /data not available, yet, but a possibility of frosts around -3°C is real/, but too in Hungary – in Kakucson, -1,1°C or in Csévharaszton -0,4°C was according to idokep.hu measured /https://www.idokep.hu/hirek/megerkeztek-az-elso-oszi-fagyok/

In the case of snowing in lower situated areas, we will inform you on Mkweather soon.