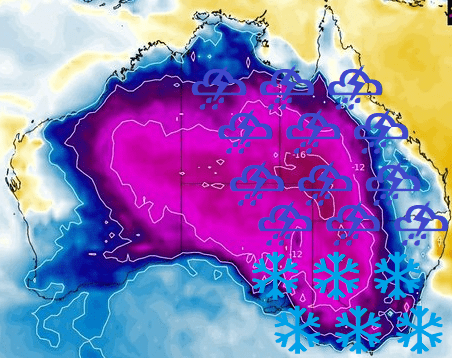 Already in one of the last Mkweather articles, we warned before anomalous storm system moving above eastern Australia /https://mkweather.com/eastern-australia-expects-catastrophic-floods-alice-springs-has-already-received-100mm-rainfall-the-most-in-20-years//.

Storm systems really have arrived, in Queensland brought record rainfall totals and the next floods, while in Tasmania, Victoria, and New South Wales, snowfall appeared in elevations 200 – 1000 MASL.

It´s not very traditional, that 3 Australian states received snow only 2 weeks before the start of meteorological summer.

The temperature in Hobart, Tasmanian capital, dropped to +2,9°C, which is the coldest November temperature since 1953.

30 centimeters of snow fell about the Western and Central Plateau districts, and there were also falls in the northeast highlands, Tasmania. Snow cover was creating already above 200 MASL.

Parts of SE Australia therefore for a time reported more snow such as Canadian metropolitan cities in Ontario.

Near storms fell in the most populated parts of Australia regionally above 100 mm of rain in a very short time.

Persisting cold and stormy patterns in Australia is bringing mainly ongoing La Nina, in a combination of wet MJO and negative phase of IOD.

La Nina in Australia is traditionally associated with a possibility of strong spider season or mice plague, while heatwaves, drought, and extreme wildfires are significantly limited.

In summer season 2021/2022, the first part of the season should be anomalously stormy and colder, thanks to the negative IOD (Indian Ocean Dipole) pattern, while IOD+ should bring a peak of Summer 2021/2022 in the second half of the season.

(Visited 254 times, 1 visits today)
Liked it? Take a second to support on Patreon!