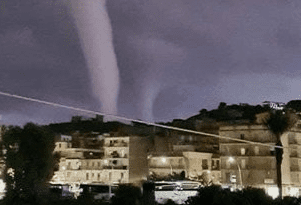 In the last week, Mediterranean storm activity has again bothered subtropical countries in Europe and partially North Africa, with a result of many tornadoes and waterspouts, hailstorms, or heavy rain events with floods.

The worst situation has persisted in Italy, where 10 tornado reports have appeared (+1 in Malta and 1 in Greece, source: ESWD).

In Sicily, the largest precipitation amounts were reported on 11. November 2021, 154 mm in Santa Teresa di Riva.

Għajnsielem in Malta reported on 11. November 115,3 mm with a result of severe floods.

Severe rainfalls up to 50 mm appeared during the last days along the coast of Libya, too, with large hail.

Heavy rains with floods and severe winds appeared before a few days in Port d’Addaia, Balearic Islands, Spain, too.

In the next weeks, possibly until New Year 2022 /https://mkweather.com/winter-should-be-strengthening-until-new-year-2022-wider-european-region-estimates//, AO- and NAO- phases are forecasted, which should mean significantly above average activity of Mediterranean lows, with similar manifestations such were described in this article and in Tweets and materials below.

Therefore will be careful and watch current weather news, forecasts, warnings, and advisories.

(Visited 155 times, 1 visits today)
Liked it? Take a second to support on Patreon!