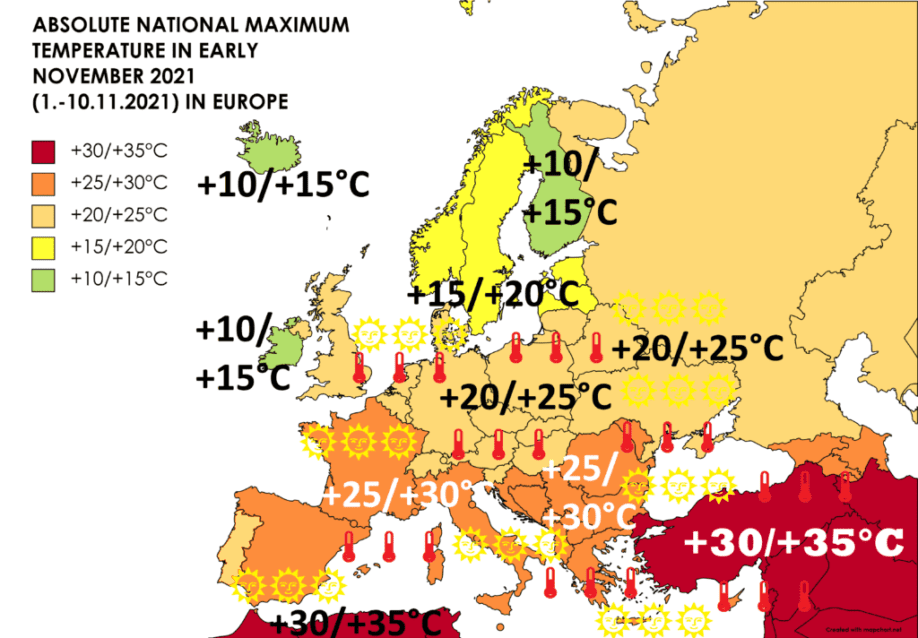 However, the second, surprising, period of Indian summer is forecasted for early November 2021, in some regions maybe until 15. November and on the western shores of Europe maybe until the end of the month.

The airflow of tropical air masses from Northern Africa will bring extremely high temperatures, in the Mediterranean regionally +25/+30°C, while in continental Europe, +20/+25°C, with rare summer days above +25,0°C, is expected.

These temperatures are at the level of all-time national records, therefore, it´s possible that historic tables will be overwritten.

In continental Europe should be the warmest central France with temperatures up to +27°C, in Germany, Czechia, Switzerland, Austria, Slovakia, Hungary or Poland should appear rare +25,0°C and more near dry foehn winds.

Balkan won´t be much hotter, maybe in Romania and Moldova up to +27°C, in Croatia, Bosnia, and Serbia +25°C.

In southern Turkey, still, temperatures above +30°C should surprise. Record hot should be in north-African countries, too.

Spain and Portugal should hit extreme weather only shorter (and earlier, with a peak at the end of October 2021), because, from the west, the next cooldown will come quickly, similarly such as in Ireland. Relatively cold will be Iceland, Finland, and Lapland, too.

Weather will be untraditionally good for outdoor activities (in many countries is November the most cloudy month of the year), although the heating season is in full swing and nights should be without foehn much colder such as in summer season (therefore dress warmly). The virological situation should in dry air be worsened, mainly in colder regions.

Mkweather already soon brings update of possible summer temperatures (above +25,0°C) in continental Europe and in November we will watch the situation in Europe, therefore stay watch weather with us.

(Visited 395 times, 1 visits today)
Liked it? Take a second to support on Patreon!