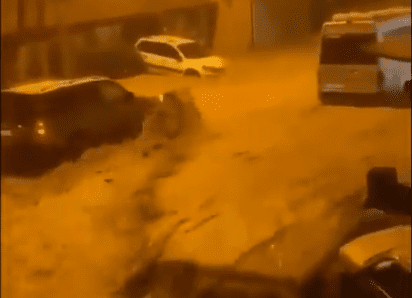 Not so far we informed about severe floods in Sochi, Russia (the city was hit around 5. July 2021) /https://mkweather.com/several-cities-in-the-black-sea-region-were-flooded-edirne-sochi-zadonsk-and-krasnodar//.

Now, Sochi after 3 weeks reports the next severe floods and series of floods were during July 2021 reported from many cities in the Black Sea region – mainly in Turkey and Russia.

At least 4 dead during the second flood in July in Sochi – cars were swimming through the streets, buildings were damaged, and properties were lost from Friday to Saturday, 23.-24. July 2021.

The sirens, heard near Sochi, which hosted the 2014 Winter Olympics, were a warning for residents, and parts of a city were flooded by 1-meter high floodwater.

Floods occurred in northeastern Turkey, too and before a cold front, the hottest temperature ever was measured in Tbilisi, Georgia (+40,6°C) and +43,7°C northward from the Caucasus, Russia /https://mkweather.com/tbilisi-georgia-with-all-time-record-406c-russia-437c-14c-below-all-time-record-and-ne-turkey-again-with-floods//. Shortly before, all-time temperature record in Turkey, +49,1°C, was measured /https://mkweather.com/all-time-record-in-turkey-491c-the-heatwave-is-deadly//.

Until 10. August, the next heavy rains are forecasted for neighborhood of Russia and Georgia. Severe storms hit Eastern Europe, southern Scandinavia, the Baltic region, British Islands, and the Alps, too.