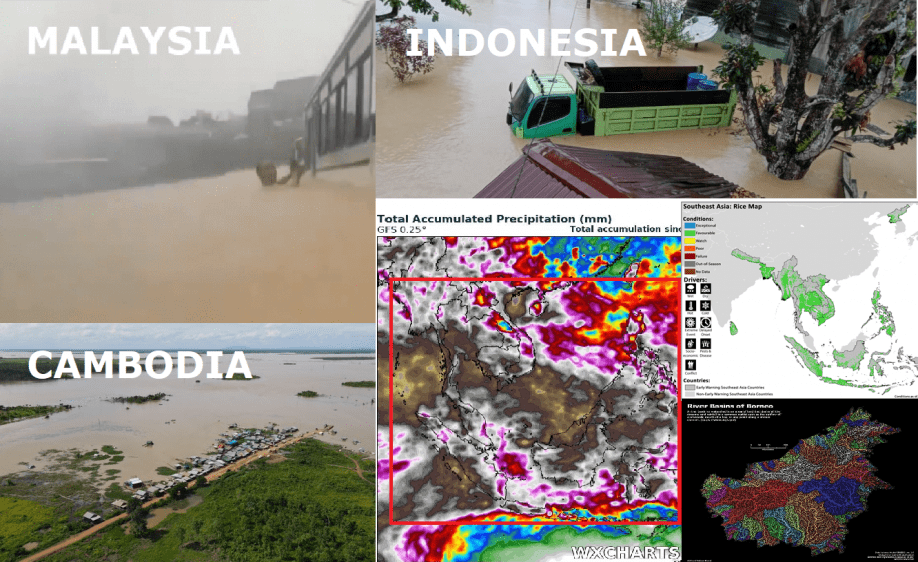 The second article from the world will look at floods in Southeastern Asia.

The last significant flood event in the region was caused by Severe Tropical storm Conson – mainly in the Philippines, Vietnam, Laos, and Thailand /https://mkweather.com/tropical-storm-conson-hit-vietnam-thailand-laos-and-cambodia-unbelievable-908-mm-of-rainfall-and-20-dead/; https://mkweather.com/tropical-storm-conson-hit-the-philippines-vietnam-and-se-china-floods-are-reported-from-thailand-myanmar-cambodia-indonesia-and-east-timor-se-asia/.

After or simultaneously with Conson, the next flood events appeared in some countries of Southeastern Asia.

In Sabah province, Malaysia, severe floods (mainly the city of Panampang), with minimally 3 dead and 1,5 meters high floodwater on 15. September 2021.

Rainfall in the larger region in Malaysia around 15. September 2021 reached more than 100 mm. The streets of the city were heavily flooded, such we should see in the videos below.

Parts of Indonesia, mainly Western and Central Kalimantan (Borneo) were heavily flooded, too.

The Meteorology, Climatology, and Geophysics Agency (BMKG) forecasted that the rainy season in some key regions will last until November 2021.

According to agricultural authorities, however, wet and stormy weather is bringing very good conditions for rice cultivation (La nina conditions) /see a map of conditions according to GEOGLAM Crop Monitor.

Forecasts until 5. October 2021 are saying above heavy rains mainly in southern Myanmar, southern Thailand, southern Cambodia, southern and northeastern Vietnam, southern Philippines, eastern Malaysia, and Brunei and parts of Kalimantan, southern Sumatra and Sulawesi, Indonesia, such as in Papua-New Guinea, with the next possible flood events and landslides.