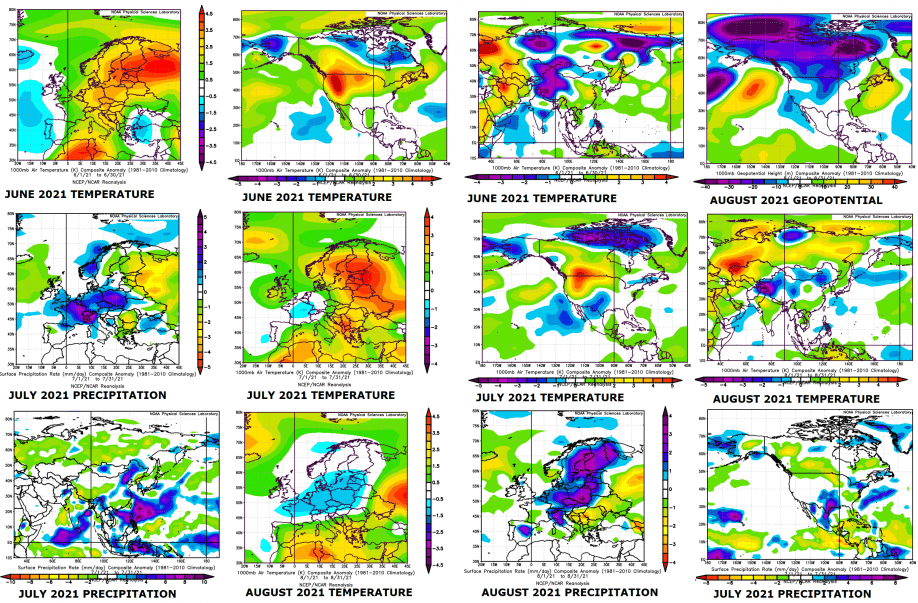 In this special Mkweather article we will look at monthly composites of air temperature, precipitation, geopotential (air pressure), and zonal and meridional winds for June 2021, July 2021, and August 2021 in Europe, North America, and Asia.

Winter 2021 in Southern Hemisphere will be a subject of our interest already at the weekend.

Composites for all Summer 2021 or Winter 2021 (JJA 2021 together) for continents you already should find here: https://mkweather.com/a-big-special-composites-of-summer-winter-2021-in-continents-of-northern-southern-hemispheres-temperature-precipitation-air-pressure-zonal-winds-and-meridional-winds-anomalies/.

High geopotential (pressure) was located mainly in the northern half of Europe, Italy, and western Balkan.

Heatwaves occurred almost in all continent, with above-average June 2021 temperatures, but the hottest was in Italy, western Balkan, Central Europe, Baltic region up to Arkhangelsk. Colder anomalies appeared only above Istanbul, western Iberia, and Iceland.

Heavy rainfall and storms appeared from Iberia to Czechia and from SW Russia to Greece, little in parts of northern Europe. Drought appeared mainly in Italy, western Balkan, Hungary, Baltic states, and northern Poland, the northern half of European Russia, southern Scandinavia, and western British Islands.

Extreme heat dome, which brought anomalous heatwave in Canada, caused large positive temperature anomaly fro British Columbia along all US-Canadian border, then up to Yukon on the north and up to Baja California in the south. From Nunavut to northern Labrador and above western Alaska, cold temperature anomalies appeared.

Above-average precipitation anomalies were recorded in the Gulf Coast region and Mexico, thanks to the early start of hurricane seasons 2021 and too in the Great Lakes region and along Alaskan and British Columbian coasts. Dry was in northwestern and north-central USA, western Canada, Central America, Florida, Hispaniola, or central Alaska.

Positive temperature anomalies were outlined above the Ural region, western Central Asia, almost all Middle East despite Yemen and Oman (where colder), parts of Central Siberia, Fra East, and the northern half of Japan, such as southern China, Vietnam, or Indonesia. Negative temperature anomalies appeared on the front side of blocking high above Western Siberia, including eastern Central Asia and Tibet, too in parts of India or the Philippines.

Highly above average temperature across the continent – mainly eastern half. Only above France, western Germany, Belgium, Luxembourg, and Switzerland colder.

Wet anomaly above western Gulf Coast and NW Mexico, Northeast and western Alaska. Dry anomaly in western Canada and the neighboring region of the USA with Canada, Central America, Yucatan, and the Caribbean, Mid-Atlantic.

(Visited 149 times, 1 visits today)
Liked it? Take a second to support on Patreon!