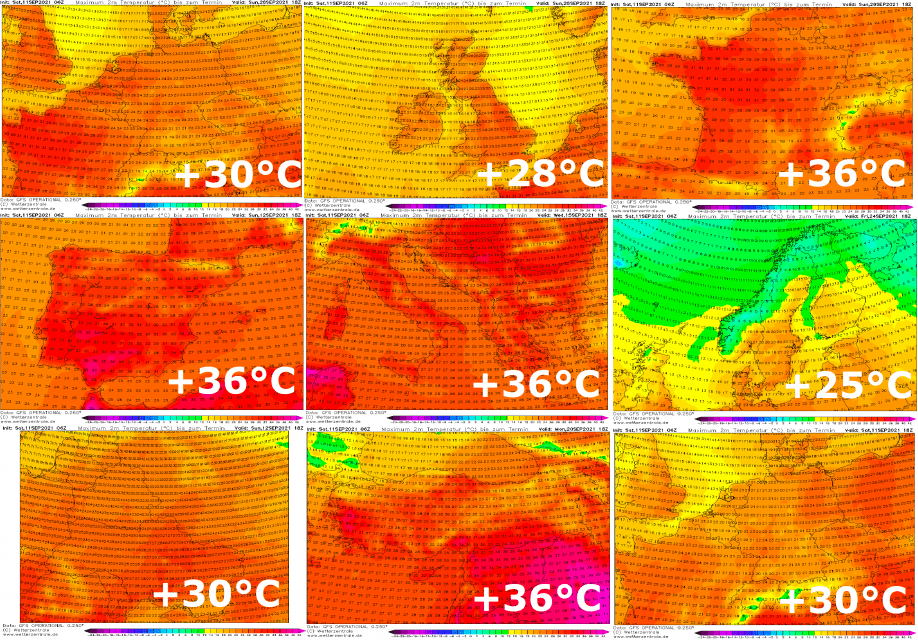 While around 20. September, severe coldwave, with a possible regional snowing around 800-1000 MASL and frosts in valleys maybe up to -5°C in continental Europe is forecasted, around 15. and 25. September we will enjoy the last summer, in southern Europe tropical days, yet, with maximum temperatures above +25°C / above +30°C / very rarely above +35°C.

Severe frosts and snowing around 20. September in Europe will be the topic of the next Mkweather article.

Relatively surprising should be hot western France, where coldwave around 20. September won´t come and temperatures should during the hottest days reach up to +36°C. Hot should be the second wave in the British Islands, up to +28°C!

Scandinavia should see the last +25°C of the year in southern parts, in Eastern Europe will be the second heatwave probably colder (the first from +25°C to +30°C)

Above Balkan, up to +35°C is during the peaks of heatwaves possible. Severe cooldowns are however temporarily forecasted for Greece or northern Turkey, with maximum temperatures in cold regions only +10°C between both heatwaves.

If you love summer weather, it will be in many regions the last chance for summer-like activities, because, in October, the next severe cooldowns, frosts, and gradually the first snowing events are very possible.

Autumn and Winter 2021/2022 forecasts for Europe you will find here /https://mkweather.com/autumn-2021-forecast-for-europe-mostly-dry-and-frosty-autumn-be-prepared-for-early-severe-frosts/; https://mkweather.com/winter-2021-2022-forecast-the-first-reliable-estimates-extreme-cold-blasts-from-canada-and-western-siberia-snow-in-western-europe-and-eastern-asia-la-nina-qbo-to-qbo-shift-sufficient-nao-ao//.

(Visited 109 times, 1 visits today)
Liked it? Take a second to support on Patreon!