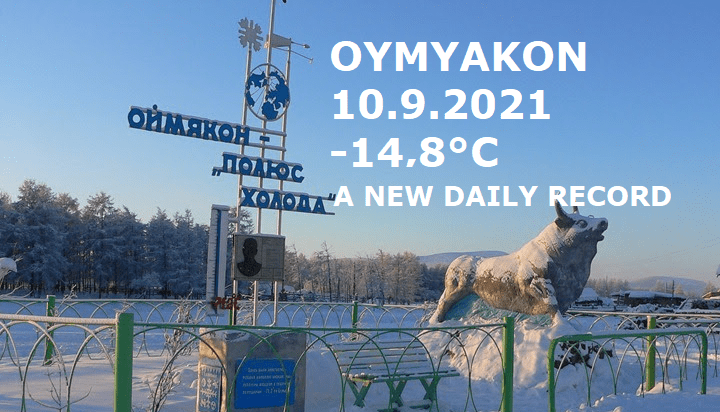 It appears, that winter season 2021 wants to come prematurely, because the next untraditionally strong coldwave appeared in Siberia – Oymyakon, Yakutsk, reported on 10. September 2021 a new daily record of temperature!

So cold in Oymyakon has never been in the period 2.-13. September in any year measured – the minimum temperature dropped to -14,8°C.

In August 2020, a similar coldwave, with almost -10°C appeared /report on our old webpage: https://mkweather.com/oymyakon-96c-147f-36c-from-absolute-august-record-this-year-the-autumn-season-came-to-the-republic-of-yakutia-early//.

Extremely cold weather was reported from Delyankir, too, with a minimum temperature of only -14,4°C.

In the next period, a coldwave from Europe will be shifting above western half of Siberia /https://mkweather.com/ecmwf-6-week-forecast-until-18-10-2021-europe-north-america-world//.

(Visited 123 times, 1 visits today)
Liked it? Take a second to support on Patreon!